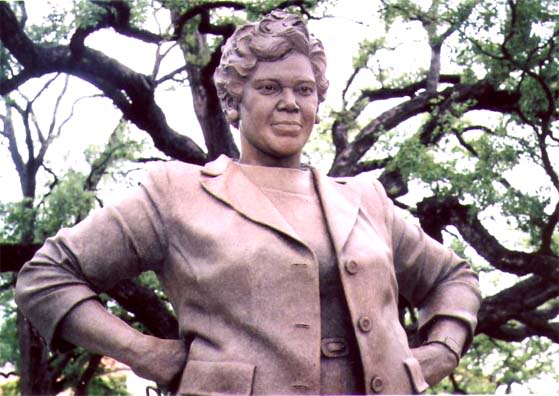 “It is a classic American success story: A poor child of extraordinary intellect, driven by parents who sought a better life for their offspring; an ambitious student who turned to the study of law because it seemed to provide the key to influence; a young politician who, not despairing after defeats in two attempts for public office, was elected on the third try; a state senator and then a member of Congress, who sought out and gradually won the confidence of the powerful and who was not beneath compromising and making deals to win some of that power.

It was, in short, the road to success that white men had traveled since the country was founded.”

A few months ago, I had never heard of Barbara Jordan. I started doing daily posts on an LGBT history site that I created, and one day I came across Jordan. I clicked on a few links and watched her powerful and moving speech at the impeachment trial of Richard Nixon, where her mix of clear-headed and unbiased focus, social justice, and powerful oratory skills stirred my soul, and then I saw her moving speech at the 1976 Democratic National Convention and had to sit down I was so impressed. Then I learned that both speeches are considered in the top twenty of best American speeches given in American history. So I quickly sought to learn more about her.

Barbara’s hero was her grandfather, her mother’s father, John Patten. Despite a meager upbringing, Patten married and had a family, and opened a candy shop, establishing a business with which he planned to provide for his family for their entire lives. When a young black man robbed Patten’s store one night, Patten grabbed his gun and chased the man into the streets. When white policemen saw Patten with a gun, Patten put up his hands to surrender, but one of the officers shot him in the hand. Patten was later put on trial, where the police claimed Patten had shot at them multiple times, and an all-white jury convicted Patten to ten years in jail. Patten served 8 years in filthy, undernourished conditions. He lost his business, and one of his children died while he was gone. Upon his exit, he began peddling junk, and he taught his favorite granddaughter, Barbara Charline, how to work hard and how to stand up for herself.

Barbara witnessed the impacts of racism and segregation on a daily basis growing up, but she was able to view the entire system with a keen mind. She excelled in school, learning how to emphasize her talents and challenge her shortcomings, and pushed herself through Harvard Law School. Settling back in Houston, she began running for public office, and quickly learned how the local white politicians wanted to take advantage of her talents and race to further themselves. She lost two elections before staking her own claim and digging in on her own terms.

Over the following years in her terms of government, first in the Senate, and then in Congress, Barbara developed the unique ability to stand firmly for African Americans, and for women, while maintaining alliances with the white politicians around her, particularly one with Lyndon B. Johnson during his time in office as president. She was sought out hundreds of times for public speeches, was considered for the vice presidency by Jimmy Carter (though she ended up turning down an offer in his White House unless he offered her the position of Attorney General; he didn’t), and had a group of national followers who wanted her to run for President, but she felt the time was not right.

Jordan had the unique capacity to remain in the moment, something I strive for on a daily basis. She could take insurmountable tasks, like researching and dusting off old policies and procedures, without the benefit of the Internet, and spending weeks and months compiling notes to form clear-headed arguments. She addressed her needs, formed boundaries, celebrated life, valued her friends and loved ones, and maintained a balance of self-care, career aspirations, and personal relationships. She lived, and she lived large, and she lived well.

Barbara died just short of the age of 60, after a years long battle with multiple sclerosis and, later, leukemia. At her side until the end was Nancy Earl, an educational psychologist, a white woman, and Barbara’s best friend, lover, and partner for 30 years. Barbara lived in a time when she could not come out as lesbian, and likely had to introduce the love of her life as her “roommate” or “friend” in public. They weren’t allowed to marry, but they lived as if they were. Earl and Jordan loved each other deeply and fully. They owned a home together and traveled together, an interracial lesbian couple in Texas, keeping their home life a secret from the public. This both delights me and makes me sad.

Barbara Jordan was the first southern black woman elected to the House of Representatives, the first African American elected to the Texas Senate after the Reconstruction, the first black woman to address the Democratic National Convention, and the first black woman to be buried in Texas State Cemetery. Since her death, Jordan has been awarded the Presidential Medal of Freedom, has been put on a postage stamp, has been placed in the National Women’s Hall of Fame, and has had numerous schools as well as a main terminal in the Austin airport named for her.

Barbara Jordan broke down barriers for women, for African Americans, and for LGBT people, in the face of oppression and impossible obstacles. Her skills and talents led her to rise above. Now envision a world in which all are given equal opportunities for success, when systems of oppression and privilege are not in place to hold others back. What have we missed out on because we favor the majority and make it easier for them to succeed?

I am proud to call Barbara Jordan a personal hero. My world is better because she lived.