“Dad!” A, my 6-year old son, bounded into the room with excitement. “I forgot to tell you! At school today, I was designing a brand new game to play! It’s going to be epic!”

I turned toward him with genuine excitement. I loved when he got this excited. “Oh yeah? Let me see it!”

He put his hands on his hips and looked up at me with a half-roll of his eyes. “You can’t see it yet. It’s still up here in my head. I didn’t actually design it yet.”

A began talking animatedly. “Okay, so you know how people love fighting games, like Injustice or like that Pokemon fighting game, or, like Mortal Kombat. This is one of those games except it is full of monsters. I’m going to call it In Monster Life!”

He paused dramatically, and I gave a ‘Whoa’ sound.

For the next several minutes, A followed me around the kitchen, telling me about the different monsters he would design, and how they would all have different skills and special moves. I could tell he was making some of it up as he went, but his rich stories had always been rich with details, and he never forgot them once he spoke them out loud. I had always called him my little story-teller. He was brilliant at coming up with original ideas, and he put so much drama into his stories, using voices and inflections. He’d been doing it since he was two, and I constantly wondered how this talent would blossom when he grew up. I’d gotten my story-telling skills from my mother, and it seemed A had inherited them from me, but he certainly had his own spin.

“And there is also Birdman! I think he is my favorite one. He’s, like, a human guy who had some science stuff happen and now he is part bird! He has like human feet and huge wings so he can fly cause they are connected to his arms, and he has some feathers and skin both, and he can grow beaks and shoot them at the bad guys! Well, no one is the bad guy totally but he can shoot them at the guy he is fighting. He can shoot so many beaks!”

After a while, I got out a pen and paper and started making a list of the different monsters he was describing, making effort to spell them as he said them, as in the case of the ‘Abomiddle Snowman’, who “has so many muscles and fights best in cold places!”

A told me that he wanted 12 monsters total, and as we got farther down the list, I could tell he was making up creatures on the spot.

“I guess there should be maybe one girl monster, so there can be Hyper-Girl. She’s really funny looking and monstery, like part-monster, and she has crazy teeth, but she can shoot off some energy stuff from her eyes that makes people around her crazy because she is so hyper!”

As we finished the list, A grabbed a huge stack of paper and sat down at the table to begin designing the monsters. I wrote the names on top of each page, from Hoomanji to Hydro-Fire, and spent the next few hours carefully designing each one, using intricate detail in his 6-year old style. There was a “robot cube” monster, who looked like a cube but could transform into different shapes. There was “like a lobster monster except he is like a cyborg and can shoot stuff and stuff”. He designed a “demon that is also a snake” and a “ghost that can turn into not-a-ghost and fill the air with steam and that is the only time he can be attacked”.

When A wanted one of his characters, a “robot-barbarian with a big sword and a little sword” to be named “He-Man”, I told him that was already trade-marked. After he learned what a trademark was, he decided to change the name. “We can just call him ‘He-Guy’ then.”

A then came up with six different battlegrounds for the monsters to fight in, including a “lava jungle” and a “water desert,”, and he giggled as he wanted one silly battle-ground, calling the last one “Clifford’s playground”, as he looked at his toy version of the big, red dog himself.

Seeing his creations down on paper only energized A more. I found him baffling at time. He could sometimes struggle to get through a single short book, and he could barely focus long enough to put his own shoes on, sometimes taking as long as 6 or 7 minutes, but he could focus on a task like this for over 2 hours and not run out of energy. He asked me to assign him some mock battles, and I wrote a few out on paper, choosing two to fight and a battleground for them to fight in. He then assigned a few drawing assignments for me, and I worked extra hard to match the details of his creations in my art, to his utter joy. Soon, we pulled my 9-year old, J, and my boyfriend in on it, and we had a stack full of drawings of the different characters. Later, I made sure to spend one-on-one time with J, playing with toys and giving him plenty of attention. It’s always necessary to balance the dad scales so both boys feel loved.

Before bed that night, A gave me a huge hug. “Thanks for helping me with In Monster Life, daddy. Are you proud of me?”

“Buddy, I’m so proud of you. You have such a great brain. It’s always telling stories.” 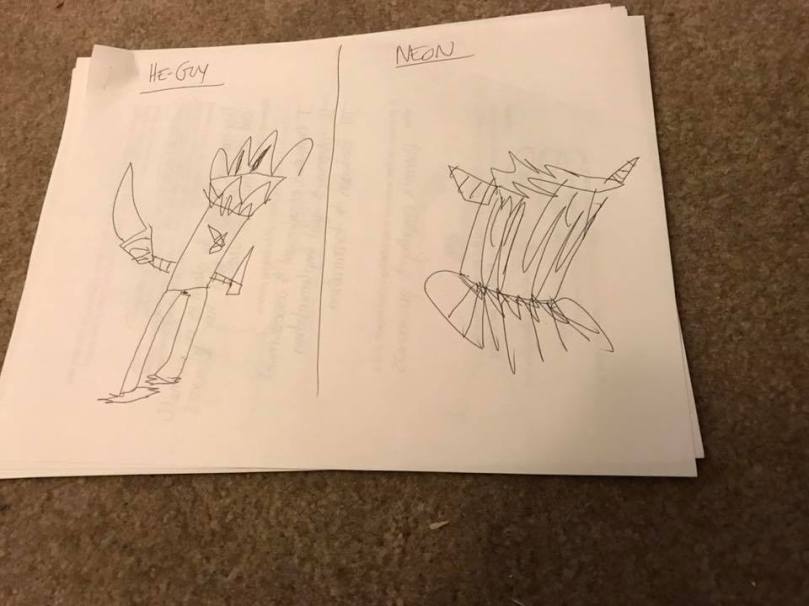