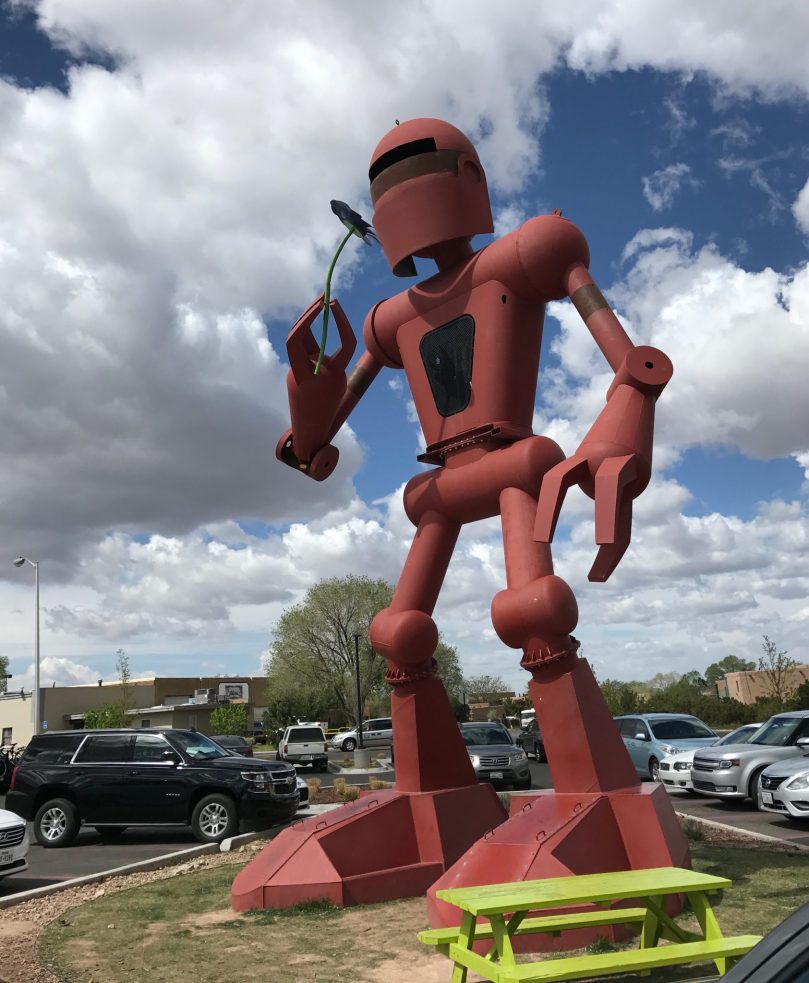 Clutching my roasted eggplant veggie wrap and my hot coffee, I took a seat at the picnic table underneath the giant spider, setting myself in the shady part underneath the spider’s abdomen. The Santa Fe sunshine was perfect but bright, and I wanted to read.

A few minutes later, an older man, in his mid 60s, sat across from me. He was tall and thin, almost wirey, and he had a close-cropped grey beard and a floppy sunhat. He had a plate full of meat, rice, and potatoes, and a bottle of Orange Crush.

“Whatcha reading there?” he asked me through a mouth full of food.

I showed him the cover of my book, a mediocre autobiography by Elvis Costello, and smiled.

“Ah, he’s one of my favorites. And whatcha eating there?”

The conversation flowed easily from there as the man, overly friendly, asked several questions. He learned I was visiting from Salt Lake City, that I had a boyfriend and kids back home, that I had recently written a book, and that I was a social worker. He seemed astounded that I enjoyed taking little weekend furloughs for myself in unfamiliar places.

“Me, I never really planned on living here. It just kind of happened that way. I spent my career in California as an engineer, surveying land for big projects, and teaching at a few universities while my wife spent her time in education. We raised some kids, they moved away, and we wanted a fresh start. We came here for a visit, and we just kind of never left.” He took a large bite of potatoes and a swig of orange and kept going. “Now I spend my days doing stuff I love, and so does she. This place is weird, right? It’s perfect. She’s off painting this morning, and I just took an improv comedy class that they have down the road every morning. It’s all retired guys, and most of them are gay. Hell, most of Santa Fe is gay, which means we have the best neighbors.”

Then he seemed to remember where we were, and he indicated his fork at the giant spider above our heads, then over toward the other giant statues nearby, one a large metallic wolf, the other a building size robot smelling a flower. “And what do you think of this place? Did you go in? Tell me you went in.” I nodded, smiling. I always tend to get slightly quieter around those that are loud. He kept talking. “I’ve never been in. I’ve been meaning to. I just like to come down here on Saturdays after improv cause the food trucks are fantastic. But what was it like in there? What is Meow Wolf? I still can’t figure it out.”

“It’s… hard to explain,” I said simply, and I tried computing a way to explain it simply. “Have you ever taken your grandkids to McDonalds, to the play-land there? They climb up a series of platforms and end up in a big blocky room that has three different exits. One leads into a tunnel that winds up in a fake car with a plastic steering wheel; one leads into a room with an interactive tic-tac-toe game; the third has a slide in it that lands in a ball-pit at the bottom. Conjure that image, except multiply it by a thousand, and make it big enough for adults.”

The man listened intently as my voice rose in enthusiasm. “It was so weird. I felt curious and full of wonder the entire time, and I was in there for over three hours. They have this whole storyline that they tell you about a family that has gone missing, and then you go in to explore their house, except that their house has been hit by a reality-altering alien entity and all of the rooms are portals into little Twilight Zone dimensions. There were over 72 different rooms connected in the most bizarre ways, and all of them are interactive art displays.”

“How strange,” he said simply as I continued.

“Like I went in and saw the house and I read the family’s mail in their mailbox, then I went down a sidewalk and turned a corner, and suddenly I was in a passage of neon trees with fish swimming in the tops, and past that was an alien ship. Then a minute later, I found this narrow spiral staircase that I could barely squeeze myself through, and at the top I had to push this door open and it made a woman scream. Well, I climbed through the door and looked back and realized I had climbed out of the washing machine that was in the family’s home on the upstairs!”

The man listened as I continued describing the house. The family photo albums, the bizarre images in the mirror, the portal in the fridge, the room of robot hands, the cartoonish room, the mechanical hamster, the harp made of lasers that I actually got to play.

“But then about a thousand kids came in all at once, and I realized I was ready for lunch,” I laughed, noticing the four school busses now parked in the lot.

“It sounds like you need to bring your kids back here,” he laughed.

“Oh I had way more fun without my kids today,” I admitted. “But I would love to bring them back here.”

“You really seemed to have fun in there! I’ll have to bring my wife back next week.”

Out of words for a minute, we both cleaned up the last of our plates, A silence hung in the air, and I looked forward at the Santa Fe skyline, rolling hills in the middle of the desert. Despite how busy it was, I could see green everywhere, and I realized how many birds were singing.

Then the man burst out with one loud laugh. “God, Santa Fe is weird!”

“It really is!” I laughed back, excited to explore more.

“And it’s perfect just the way it is,” he said, excusing himself shortly after. He got on his bike and rode off, past the flower-smelling robot and into the dusty roads beyond.

I can see myself up there

High on a mountaintop

(“A banner is unfurled”

the familiar sing-song lyrics autoplay in my head

and I squelch them swiftly).

From such a vantage

I could view the entire valley

and see all the corners and shadows

that have given me life.

In them, I would find my heritage,

The streets are quiet up here

Full of newly-weds and nearly-deads they say

because history is changing and people with it.

Those who built these sidewalks

are no longer the ones treading upon them.

and Abinadi, a man I once admired

because he allowed himself to be burned to death.

My back is to the city now

and all is rustling leaves

and one lone cricket

and sunshine on my skin

and I think of how I was carried here

and how I almost