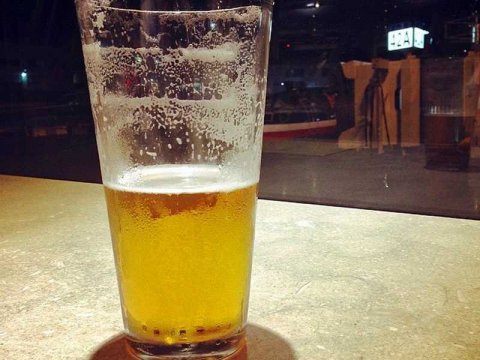 The old man grabbed Mike’s shoulder abruptly, then physically turned Mike to face him. “Saaaaaaaaaay! A little longer with me-saaaaaaaay!” He sang nonsense words in an off-key drawl, trying hard to harmonize with the inane music blaring from the overhead speakers. The words didn’t match at all.

“You know a guy like me and that’s over there,” he nodded his head toward the bar as he slapped Mike’s shoulder a few times, then he stumbled toward his bar stool, sat down, and took a swig of beer. He wore a long sleeve pullover and a ball cap over a pair of beige shorts, and he was likely in his late 60s. He immediately conjured images of Bobby Moynihan’s character Drunk Uncle from Saturday Night Live a few years ago.

Working hard to contain my laughter, I leaned in and whispered in my boyfriend Mike’s ear. “So that just happened.”

He turned to me, mock horror on his face. “What was that?”

And I just grinned. “Clearly, he is very interested in you. He tried serenading you! And then a guy like him and that over there!”

Mike fought off laughter. “What does that even mean?”

A feigned look of seriousness crossed my face. “Look, you have a free pass tonight. If you want to go home with that very handsome man, you are certainly allowed for tonight only.”

“No thank you!” Mike pursed his lips and narrowed his eyebrows, staring me down, then we both burst out laughing.

The bartender, a thick barrel of a man with a full beard, whispered an apology to us. “Guys like that, drunk this early on a Sunday night, well, let’s just say I’ve seen him do worse than that.”

We both ordered a gin and tonic, then sat down at an empty table to sip our drinks and chat. The bar was mostly empty. After a long weekend of hanging out with the kids, running errands, and working in the house, we thought we might head down to the local gay bar, the Sun Trapp, for an evening drink. I wanted to go early, Mike wanted to go late. It was a holiday weekend, I reasoned, so maybe it would be busy early, giving that Labor Day was the next day. So we compromised and arrived at the bar at 9:30. He was right, it was dead.

Random conversation between us varied from topic to topic. We discussed guys we used to date, our high school graduations, and what we had looked like as teenagers. We laughed at old family stories and held hands across the table. I watched through the window to where a solo man, clearly very drunk, gyrated on a dance floor all by himself to a techno-version of some song that should never have had a techno-version of it made. All in all, it was a lovely evening. I commented on how this didn’t feel like Salt Lake City, this felt like some small town gay bar in an unfamiliar place on a week night. And we laughed about that as we finished our drinks.

A half hour passed as we chit-chatted, and we decided we could do one more drink before heading home for the night. (I had to work in the morning, but he’d get to sleep in). We went back up to the bar to wait our turn, then heard a man walk up behind us.

He made a clicking sound with his tongue, appraising us uncomfortably, then he walked up to the side and looked us over. “Well, Charlie,” he said to his friend at the bar, “look at these gents. They don’t have an ounce of fat on them! Not that I’m complaining!” Mike gave an awkward laugh and avoided eye contact as the man continued. He clearly hadn’t looked closely, as there is at least one ounce of fat on me. “I mean, I don’t mean to be friendly, but as much as I enjoyed the view from the back, look at the view from over here! I better not be too friendly, Charlie, or the next words to come out of my mouth will be ‘drop your pants!'”

Mike gave me a look that indicated he wanted to roll his eyes. Just then the bartender indicated to the drunk old man that had been singing that his cab had arrived.

“I ain’t gettin’ in no cab!” he slurred. “I know I ordered it, but I ain’t going! And I ain’t cut off, even if you say I am or was!” He struggled to stand up from his stool, clearly outraged in his drunken stupor.

The new man continued speaking, and I finally looked over at him. He looked like a hippie, with a bandana around his head, and a long beard that extended past his rib cage. His face was old and weathered. He wore a baggy t-shirt to hide his ample stomach, and a pair of jean shorts.

“Not that anyone is asking me, but a few years back, I up and quit everything and now I’m driving a truck! I can have anybody I want back there. A while back, my brother-in-law told me he needed to find me a girlfriend, but I just told him, I don’t need no girlfriend, I just need me a sex slave! He called me crass, but I’m not afraid to say it! I’m 63 years old, what do I have to lose! Nobody wants any of this anyway! Now I just gotta find somebody who does!”

My attention went back to the previously singing man. “I’m not going, I say! I want one more!”

By the time I could turn back, the truck driver was hitting on a girl who had lined up behind me at the bar. “Well now, a pretty girl like you needs a drink! What do you want, honey?”

We left shortly after that and headed home. I contemplated all of the little bars in all of the little towns around the world, all with drunks just like these guys, early on a Sunday night, flirting blatantly with whoever walked in front of them. It was entertaining, but heartbreaking also in its way.

Sober and content, I drove toward home, jabbing Mike with my elbow.

“You were very popular this evening!”

He wasn’t flattered. Not at all.