The air in Leamington was clear. Sometimes I forget how polluted the skies in Salt Lake City can be until I drive outside of it. It’s like my lungs just adapt to the smoky congestion, and when I get away I remember how to breathe.

Leamington is a little stretch of nothing in the center of Utah. There are no businesses. I saw a one-room post office as we drove into town, turned onto a dirt road, drove round some bends through farmland, and parked in a dusty outcropping of the house’s driveway.

Like the rest of Utah, Leamington was settled by the Mormons a few generations ago. I pulled up the Wikipedia page and read about the original settlers, establishing farmland, growing sugarcane to make molasses, rerouting water through a canal, and growing crops, which they would take to a local mining town (appropriately named Eureka) to sell. (I drove through Eureka later. It has a few gas stations, and more homes. The closest business to Leamington was a few dozen miles away). Eventually, the settlers built a little branch of the railroad. The Mormon church and the local cemetery are the only things listed as noteworthy to visit. Still, a few hundred people live here, which seems like so little until you realize that a few hundred is still a lot of people when you line them all up.

My friend Tyler and I got the kids out of the car and surveyed the rolling farmland around us. We could see cows in the distance, crops, shades of green and brown. I could hear songbirds and the sound of many buzzing insects.

“Well, lots,” Tyler answered, having grown up in the area. “Owls, birds, lots of voles, tons of bugs. Mule deer.”

“And what kinds of predators?”

We knocked on the door of the farmhouse where we would be sleeping for the night. I’d confirmed this reservation weeks ago when we first planned to come to this remote area of the state. As I reminded the boys to be on their best behavior, our host opened the door.

She was a plump woman in her late forties, her hair pinned back, her granddaughter on her arm. She wore an apron over her white shirt and black pants. Beyond her on the wall, I could see a large picture of a Mormon temple, and a family portrait with she, her husband, and their six children. This was a salt-of-the-earth, hard-working family. I knew from the online profile that the husband worked nearby as an engineer, and that she was a housewife, though the older four children were all out of the house now.

“Hi, I’m Chad!” I said, enthusiastically, waving at the grand-daughter. I saw the woman’s smile slowly drop as she realized there were two men there with children. Her eyes flashed between us, one to the other, and her mouth dropped open. Her face paled. There was a long, pregnant pause as she tried to figure out our relationship. (I would later explain that while Tyler and I are both gay, we were not a couple and would be sleeping in different rooms. It’s quite possible we were the first gay people she’d ever met.)

After the initial awkwardness passed, she greeted us with a forced smile and invited us inside. She showed us the rooms where we would be sleeping in the basement. The shelves down there were packed with thirty years worth of clutter, almost hoarding levels of clutter. It was organized, but it felt like it would cave in on us. Board games, books, notebooks, old art projects, and Tupperware containers full of knickknacks. The beds were lacy and plush, with names of children stenciled onto pillows. Family photos, pictures of Mormon prophets, and pictures of Jesus lined the walls. Somehow, it was all incredibly comfortable, being in the home of this family, one who had carved out their entire existence in this stone farmhouse in the middle of nowhere.

After the kids settled down, I walked back outside to grab the suitcases and came face to face with a skunk. It was less than ten yards away, and I immediately felt my heart rate go up. It was quickly gobbling food up from a cat food dish, and it lifted its head to meet my gaze. I could see its jaw working, up and down, then it ducked to get another bite. It was strangely beautiful. It’s face was majestic in a way, and the pattern of black and white shaggy fur ran down its sides, with a thick tail flowing behind it. It was right in front of the car, and I stood watching it for a minute, calculating the risk of getting sprayed if I stepped toward it, but it scampered away after another bite, rushing down the driveway and up a hillside. It flowed as it moved somehow, and I had images of Pepe Lepew from Looney Toons rush through my mind, jumping gracefully as he chased the female cat.

After a good night’s sleep, the four of us woke to a hearty farm breakfast. As we sat to a meal of banana chocolate chip pancakes, sausage, fried eggs, fresh fruit, milk, and juice, the farmer’s wife told us about getting her degree in biochemistry before she chose to stay at home and raise her children. She talked about how much work it was to maintain a home this size in this location, and how much she loved living out here, yet how isolating it could be. I talked about my documentary project, Tyler quipped about science with her, and my sons bragged about how they wanted to grow up to a geologist and a farmer, respectively. It was a lovely meal,  and I could see her relaxing around us, perhaps realizing that gay people are just, well, people.

As the kids finished their breakfast, I packed the suitcases and went outside to load the car. I looked back over toward the car, and skunk was back but this time it was in a cage. The cage was small, triangular, and barely big enough to contain the small creature. It was panicked, scratching at the ground, unable to get free. It raised its head and I swear it made eye contact as it made a helpless little squeak of a sound. My heart pounded as I went the long way around, loading my suitcases in the trunk before heading back inside.

“Oh!” The farmer’s wife looked delighted. “Good! It finally worked! My husband placed cat food in the skunktrap several nights in a row to catch it. The darn thing keeps eating all of the cat’s food and scaring the grandkids. We used to get a lot of skunks around here, but this is the first one in a while.”

“What will you do with it? Do you take it out in the woods somewhere and let it go? Do you kill it?”

She grimaced. “Well, neither. If you get too close, it gets scared and sprays. In fact, as it starts to get hot outside, it will start to spray in panic. It’s going to smell around here today. But we will just wait for it to die. Skunks are nocturnal, they burrow during the day to stay cool and hunt at night. It won’t take long for it to overheat.”

A look of disgust crossed my face. “You let it cook to death?”

She frowned, sympathetic. “I don’t like it either. But if you see a spider in your house, do you step on it? Living in a place like this, we have to protect our space, and that sometimes means letting creatures die.”

When we left, I walked the kids the long way around, and told them that the skunk would be let go later. The looked at it with fascination and fear. It was getting warmer out, and it was sitting calmly now. I could see it breathing. We loaded ourselves into the car, and as we backed up, I took a long last look at it’s flowing tail, it’s frightening beauty, its helplessness. It was facing its inevitable end after seeking an easy food source in a dangerous place. And it had been caught. I humanized the creature, determining that it was facing its own fate.

We drove down the hillside, through the dusty farmland and back to the highway. I left Leamington, thinking of history, of humanity, of skunks, and of traps. 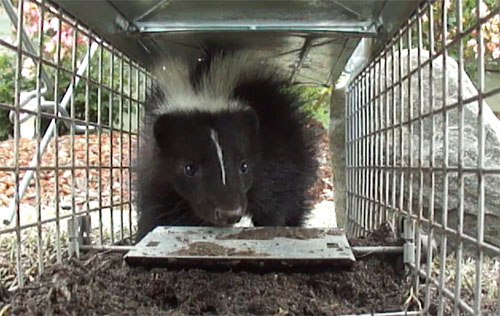