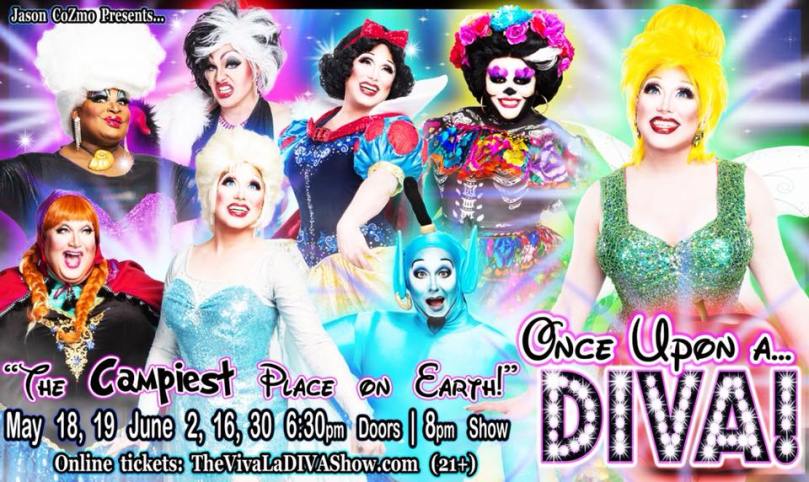 “This is not a family friendly show! We are chicks with dicks! So for those of you who came and expected not to get offended, I recommend you get over that real quick!”

The drag queen, dressed as Tinkerbell, paraded the stage with her microphone confidently, wearing thick make-up, a perfect green pixie dress, a pair of wings, and a huge yellow wig. She was hilarious, teasing various members of the audience with plenty of swag and sass. “Oh, hello there, Daddy,” she said to a man on the front row, then asked his girlfriend, “are you with him ’cause he’s got lots of money or a big dick?” She teased a girl on the other side, saying she’d be happy to give her make-up tips after the show.

Tinkerbell recounted how, back in the 1950s, she’d been approached by Walt Disney himself, who saw her as a real star, but in the end, he’d cut all of her dialogue from the show, and simply named it Peter Pan, not even using her name in the title. “He knew what he was getting into,” she explained, “so he couldn’t have been surprised when I used a bit of language on camera. All those girls going after my man. ‘Fuck you, Tiger Lilly! Fuck you, Wendy!’ just didn’t play well for the kids,” she explained.

And sitting on the raised seating on stage right, on my uncomfortable stool, I sipped on my gin-and-tonic and laughed my ass off. She really was very funny.

The show had opened with a robust and enthusiastic medley of Mary Poppins songs, a lengthy set of Step in Time, Supercalifragilisticexpialidocious, and Jolly Holiday, and I sang along with every word. The packed audience sang along, clapping, tossing dollar bills and the drag queens dressed as Mary, Burt, and the chimney sweeps. A girl across the stage and I made eye contact, as she sang along as well, and we shared a smile.

I’ve been to a lot of good drag shows over the past seven years. Drag shows, in my experience, tend to fall into one of four categories. (Well, the professional drag shows anyway, not the ones that are performed on random stages in parks or on Pride weekend). There’s the really amazing ‘female impersonator’ shows like this one, that run regularly, with seated audiences and food and drinks. There are the drag queens who host various tired events and seem to run out of material very quickly. And then there are the traveling drag queens, the late night crowds and dance floors, with long wait times and packed audiences, wall-to-wall drunk people all screaming for every move and shake.

This drag show, the Disney-themed one, was the first kind, the female impersonator show, with a regular cast, incredible costumes, and amazing lip sync performances. Shows like this require set design, painstaking costume design, choreographed routines, advertising, merchandising, themed drinks and bartenders, social media campaigning, state licensing certifications, and a hell of a lot of leadership and organization. I was damn impressed. I’d seen shows like this in San Francisco and Seattle, and to see one here in Salt Lake City running regularly, with changing themes and variable performances, was downright delightful. Just weeks before, we had seen this same cast performing as Dolly Parton, Cher, Katy Perry, Adele, and others, and it had been just as good.

The show continued with drag queens performing Disney songs from every era, with characters like Rapunzel, Moana, Cruella de Ville, Ariel, Ursula, and others, and the first act culminated in a very bold production of Snow White with all Seven Dwarves. As the second act continued, I was astounded by some of the choices, with songs from CoCo and Frozen. The girl across the stage knew a lot more words than I did at this point, and I gave her a mock bow, recognizing her Disney superiority.

My friends and I had an intermission discussion about which Disney character we most represented, and we had a good laugh as we made our decisions. One said he was Gaston, and I said his husband was likely King Louie. Another couple said they were Prince Phillip and Flynn Rider. I laughed with delight when someone compared my boyfriend to Hades from Hercules, then surprised myself by declaring that I was Prince John from Robin Hood. This was fun, I thought out loud, realizing a group of grown-ups was delighting at men dressed as Disney characters.

Getting sleepy after a few drinks, and a few hours of sitting, and after sitting for more than two hours, I stood back behind my table to stretch a bit and keep myself awake. (I’m always lame like this, getting sleepy anytime it’s past ten pm. It works wonders for my weekend social life). As I watched one of the drag queens perform, I turned my head to the side and saw someone pass through a curtain that gave a peek into the back stage area. I saw one of the performers sitting on a bench, his skirt pulled up over his knees, fanning himself as he waited to go on.

Shortly after that, Tinkerbell (the performer who also played Mary Poppins, Snow White, and Elsa) herself exited through the curtain, making another grand entrance, and gave me a quick hug as she rushed in. “HI!” she said with enthusiasm, recognizing me from social media (I presume). And as I leaned in to hug her, I noticed her thick layer of make-up, and inhaled a mouthful of Aqua Net. As Tinkerbell rushed the stage, I gagged on the hair spray, and couldn’t get the taste of it out of my mouth for several minutes.

The show ended, and for the rest of the evening, I contemplated the professionalism of these performers, giving their all to a crowd out of love for their craft, but I also couldn’t shake the image of that drag queen fanning herself on a bench, or the taste of the hair spray. These performers, like any other, must love what they do, entertaining a crowd. Love it enough to spend hours hand-sewing dresses and lining them up with sparkles, enough to learn the lyrics to long intricate songs while learning routines to go with them, enough to tape their genitals back while wearing contouring and shaping mechanisms before draping themselves in dresses and wigs, enough to spend hours applying and re-applying make-up before every show (and likely hours more taking it all off afterwards), enough to keep their equipment clean and laundered, enough to apply noxious amounts of hair spray to keep their wigs just perfect.

As the show ended, I stood up with the rest of the crowd and clapped heartily, a standing ovation for a show well done, for a group of performers who gave it their all.