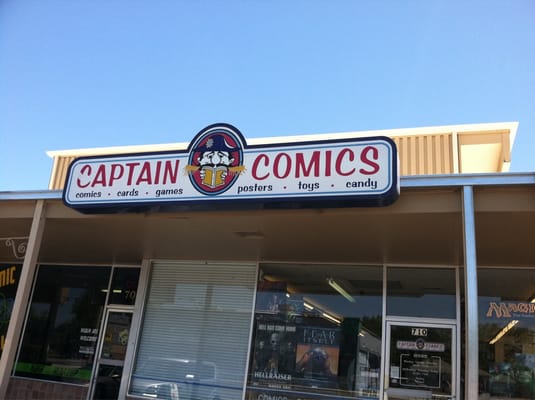 He looked up from behind the glass counter, where he was sorting through new packs of Magic: the Gathering cards. “Hey, Chad, what’s up?” I had always found Corbin handsome, but I could never say that. I was only 16, and still firmly in denial about being gay.

“Hey, I was wondering–” My heart was pounding. I shouldn’t be this nervous over something so simple.

“Are you here to empty your comic box? I put an alternate cover for the new Uncanny X-Men for you, plus your regular copy. It’s good art, could be a collector’s item if you want it.”

“Oh, no, I’ll probably just take the regular. I don’t think I could afford the alternate cover.” I smiled, awkward, and stepped to the side as a kid came up to the counter, carrying a stack of Gen13 comics, all of them featuring covers with girls who had enormous bowling-ball-size breasts in tight T-shirts. Those were bad, but not nearly as risqué as the Vampirella comics, where the girls were basically wearing strings. I hated this trend in comics in the mid 1990s, where so many artists seemed to make girls’ breasts bigger than their heads.

I waited for a moment, practicing my speech in my brain again, as the customer tried convincing Corbin to sell the comic books at half the price. Captain Comics was a tiny store, a small storefront in Idaho Falls, Idaho, nestled next to a Little Caesers and some cell phone shop on the other side. There were bins full of back issues, a wall of new comics, and sections for trading cards, card games, and comic book memorabilia. With a small back room, and a long glass counter, it had become a place of refuge for me over the past year, a place I frequented once per week at least, so I could pick up some new comics with money I had saved up.

I’d become obsessed with Marvel Comics over the past few years. I’d first fallen in love with comics in the sixth grade, when Archie Comics was printing the Teenage Mutant Ninja Turtles, but I later fell in love with the X-Men, and soon found myself wanting to buy everything put out. But I also wanted to start collecting everything that had been printed before, seeking to understand the deep and rich histories of Captain America and Thor and Ghost Rider and Spider-Man and everyone else, not an easy feat in the pre-digital age, when tens of thousands of comics had been printed over the decades before me. I had a special fondness for discontinued titles like the Defenders. If I wasn’t careful, I could easily blow entire paychecks at the store, and instead had to watch for sales, bargain bins, and occasional online auctions of comics over E-bay.

I kept my comics so carefully, bagged, boarded, and in alphabetical order, lined and stacked in cardboard boxes at home in my bedroom. As my collection expanded, the space in my room shrank, more comics lining the desk, the closet, the floor against the wall. They had become my greatest obsession, my greatest love.

And in ways, my greatest escape.

Corbin was free again as the customer huffed out in frustration. He turned back to me. “So what was it you wanted to ask me?”

I lowered my eyes, embarrassed and a bit ashamed of myself. “I, um, haven’t ever told you much about me. I’m Mormon. I work after school and everything, but I’ve been saving up money for my mission that I’ll go on in a few years, and also I’m saving up for my senior trip. And I love comics. They are, like, one of the best things in my life right now. But I can’t keep affording to buy them because–”

Corbin tilted his head, sympathetically. “Do you need me to put a hold on your box for a while?”

I looked up, surprised. “No–no, that’s not what I’m saying. I–look, my parents got divorced a few years ago and my mom married this guy, my step-dad, and he’s kind of a huge jerk, like he yells and hits and stuff, and I don’t really have a dad around. I’m not sure why I’m telling you that. What I’m getting at is, I was wondering if maybe I could work in your shop on Saturdays or something, or maybe on Tuesday nights when you get your new comics shipments in. I could work just like a few hours a week, and you don’t have to make me an employee. Maybe you could just let me work off the amount I would owe for the new comics I’m ordering? I would work hard, and that would let me keep getting comics so I could keep saving up for my mission and everything.”

My heart was pounding out of my chest as I waited for Corbin to respond. He looked at me intently, curious and wanting to ask a million things, I’m sure, but he just stayed there silent for a small eternity. Finally he spoke.

“Chad, you’re a good kid. I’ve always liked you. And you seem trustworthy.” He paused again and I waited for him to break the bad news. But then he surprised me. “You know what, let’s try it out. Five dollars an hour, a few hours per week. And you can be paid in comic books. That’s two-and-a-half standard books an hour, five books for a two-hour shift. Two hours a week on Tuesday nights work for you?”

“Yes! Yes, absolutely!” I gripped his hand in a hearty handshake, shaking hard. “You won’t regret this, sir. I’ll work really hard.” I felt like I had just made the deal of the century.

The next Tuesday I worked my first short shift. Within a few months, I was working Saturdays, and in time, even running the store for afternoons or evenings on my own. I would continue working at Captain Comics throughout my high school experience, right up until I left on my mission, for a total of three years. And the entire time, I was being paid in comic books. My collection at home expanded into around ten thousand before I was all done, and I’d move the boxes with me through most of my adult life.

Reflecting back on this story now, at the time of writing, at age 39, I think of how much comics saved me, especially during my difficult adolescence. My love of comics also led to me working for Marvel Comics for a few years, and even writing my own line of comics.

So from both 15 year old Chad, and 39 year old Chad, thank you, Corbin of Captain Comics, wherever you are, for giving a young man a chance when he most needed it.