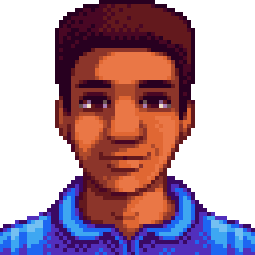 “These villagers are giving Kevin a hard time. I bet it is because he is black.”

A, my 6-year old, toggled the control to the Playstation 4 as he bounced up on to his feet, unable to hold still. He had his newly created character, Kevin, walk through the sparsely populated Pelican Town, chatting with strangers. I had explained to him that talking to everyone was important because relationships in the game were built slowly over time, by speaking with people and occasionally giving them presents. He could even learn what kinds of presents each person liked, like jewels, fresh fruit, or fish, and then give those specific gifts to strengthen the friendship bonds. A was getting the hang of it. But the villagers didn’t know Kevin at first and were saying coy and dismissive things to him.

A was playing Stardew Valley, a kid-friendly game that involved farming, building wealth, planting seeds, purchasing animals, building friendships, foraging, and even mining. He had been watching his older brother, J, play it for a few months and had wanted to try out his own character.

A had been thinking about his character Kevin for a few days before he brought it up. He waited for a quiet evening then asked if we could design a new game for him, and the boyfriend and I enthusiastically agreed. We opened up the design screen, typed in the name Kevin at his request, then moved to select the character specifications.

“I want him to have brown hair, a blue shirt, brown pants, and black shoes. And I think he should have brown skin.”

I had turned to him, surprised and pleased, and asked him why.

“Well, the town has a bunch of white people in it. I’ve watched J play and there are only a few brown or black people. They need more.”

I nodded, pulling in A for a squeeze as I changed Kevin’s skin color. And then A had gone about learning how to play the game. Kevin settled into a small house on a wide piece of land. He learned how to chop down trees, hoe the ground, purchase seeds and plant them, and water.

“Man, Kevin worked really hard on his first day!” A had said before sending an exhausted Kevin to bed for the night. And when the sun rose the next morning, A focused on taking Kevin around Pelican Town to meet new friends.

When A made the comment about Kevin’s race being the reason that the villagers weren’t being friendly, I turned to him surprised.

“You think it is because he’s black? Why do you say that?”

A didn’t look over as he took Kevin down to the beach to forage for shells and clams. “Well, you and Mom taught me about slavery. White people used to own black people and were super mean to them. And now white people are mean to black people sometimes. So maybe that’s why they aren’t being nice to Kevin.”

He looked at me with an expression that said ‘duh.’ “I know. But it’s like real life. And black people have to work harder sometimes. That’s why we need to be nice to everyone.”

My thoughts were spinning. I had made a strong effort, in the lives of both of my children, to teach them about the components of social justice. We had gentle, kid-friendly discussions about feminism, homophobia, racism, and disabilities, always with the very strong message that we are never to be bullies and that we embrace and stand up for everyone around us. While I had mentioned racism to A before, we hadn’t had any lengthy discussions about it, and I wondered if it had been something on his mind.

A turned to me. “Did you know that there were slaves a long-long time ago, too? The Egyptians had slaves before Moses freed them.”

My eyes opened wide, and I looked at him confused. “Where did you learn about that?”

Another ‘duh’ look. “Daddy, I go to school. Me and my brother both.”

I remembered that J, his older brother, age 9, had been learning about Hebrew stories in his class lately, and they had probably been talking about it at home. The boys went to a charter school with an alternative education curriculum, with sections on mythology and historical stories. I nodded, accepting the answer.

“Slavery is horrible. It’s one of the worst things in human history,” I said.

Later that night, after the kids were asleep, I thought about the implications of this discussion, cleaning up the kids’ toys. I thought of my older sister, who was raising three adopted kids, two of them the same age, one who is white and one who is black, and the differences in how the world will treat them growing up. I thought about two friends of mine, a gay couple, who are raising a black son and daughter, and I thought of a dear friend of mine, a black woman who had been raised by white parents. I wondered how all of these people in my life would feel about my white son choosing a black avatar, a 6-year old boy wondering if there was racism built into his video game. I didn’t come to any conclusions. I just felt the feelings, a mix of pride, fear, anxiety, and discomfort all at once. A had approached the topic from a 6-year old understanding, a place of empathy, not impatience or superiority, and that felt okay for now. He’d seen the need for more diversity in his video game and had made that happen, and that part thrilled me.

My sons, with their gay dad and straight mom, with their black cousin and lesbian aunt, with their Mormon grandparents and ex-Mormon parents, were being raised to see the world from a wider view than the one I’d be raised with.

As I laid down that night, I found sleep evasive. Strangely, I was just a bit worried about Kevin.