My first year of college, I had an ant problem. I lived in an old apartment up on the hill above Ricks College in Rexburg, Idaho. The complex was called Aspen Grove, but we affectionately referred to it as Aspen Hole, because the units were in various states of disrepair. There were two bedrooms, a small kitchen and living room, and a small bathroom, and generally four college students were crammed into them. Over 95 per cent of the students at the school were fellow Mormons, and we made up wards and stakes of students, there for a shared college experience with those just like us. (I find it strangely comforting to think that 16 years later, Mormon guys are still likely living in those apartments, and they probably aren’t any nicer.)

My first month in the apartments were in the dead of summer, when temperatures were higher and student population was slightly lower. I began to notice a lot of ants on the sidewalk outside our front door and around the entrance to our home, a problem that seemed to be getting steadily worse over time. My roommates weren’t exactly great at cleaning the kitchen or doing dishes, so the ants began making their way slowly inward, becoming bolder and slowly taking over the apartment. I complained about it a few times, and the landlord assured me the problem was being dealt with, but after a few more weeks, it got even more unmanageable.

One Sunday afternoon, I walked home to find a swarm of ants (hang on, what is a mass of ants called, let me look it up–okay, it’s a colony)– a colony of ants in a dark black mass swarming on the sidewalk like an inky disgusting puddle. I considered stomping there until they were all gone, but couldn’t do it. I was so disgusted. Where were they coming from, and why were they hanging right outside my front door? So grossed out, I began searching for what must have been a nest. I found nothing outside and worried it might be underground, then I realized it was in the wall of my apartment building. It was the only explanation.

Inside, I noticed, for the first time, an electrical socket that was right next to the front door. I was oblivious to it, because none of the outlets worked in that room. I retrieved a screwdriver, loosened the cover to the socket, and then pried it loose. As the covering fell to the floor, a black mass of ants began climbing out of the socket in every direction, spilling out of it like ooze, going up on the wall and down to the floor. I had disturbed the nest, and the thousands of little ants were coming out to claim their revenge in one of the most Alfred Hitchcock moments of my life.

I fled from the apartment and got the landlord, who investigated, got similar freaked out, and then retrieved an industrial size can of bug spray, which he emptied in into the wall, committing genocide against the invaders. An hour later, he was sweeping up the little corpses into a dustpan and tossing them outside into the lawn, which was also disgusting. There must have been tens of thousands of them. (I slept the next few nights at my mother’s home, an hour’s drive away). 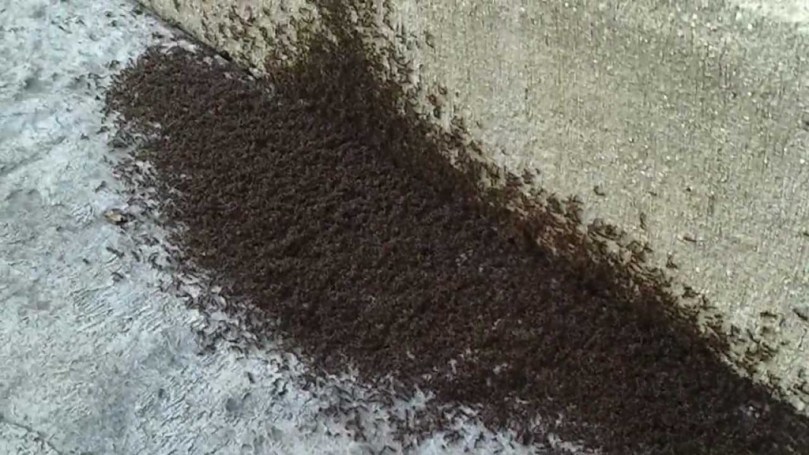 This image left my brain until recently. I was away for a weekend in Phoenix, Arizona. It was a new place, somewhere I had never been before, and there were people, everywhere. Lines waiting to get into restaurants, dog walkers, the homeless, impatient girls on cell phones, people spitting smoke into the air in their unending lines of cars. They were hacking, spitting, texting, lounging, and complaining, everyone impatient for whatever it was they were waiting for.

There are people everywhere, and in every neighborhood, and Phoenix was lovely, so I’m not sure why it was this moment that the image of the swarm of ants hit me. It just suddenly dawned on me that we are everywhere. We are vast swarms all over the planet. There are 8 billion of us, swarming out of our nests and over the mountains, deserts, oceans, and rainforests, while we consume, devour, breed, and swarm, all the while complaining that we don’t have enough.

The math of it all exhausts me. Ten per cent of 8 billion, that is 8 with nine zeroes behind it, is 8 with 8 zeroes behind it, or 8 hundred million. Like some crazy natural disaster could strike and wipe out 1 billion people, and there would still be 7 billion left. And there are reports that this next generation could take the total up to 10 billion. Yet we can’t get gun control, or women’s rights, or our prison systems, or air pollution, or global warming, or basic health care under control.

A few years into my education, in a human behavior course in college, we had a discussion on the risks of overpopulation. The year then was 2004. The population at the time was 6.5 billion. It’s been fifteen years since then, a dime and a nickel of time, and we’ve increased by another 1.5. I remember arguing, naively, at the time, from my Mormon, Republican mindset that God would take care of the population issues, and that it wasn’t a real risk as he had a grand design in mind. Another student wondered aloud if that grand design included the entire destruction of our planet.

I’m not an anxious person, but the thought of it all just scares me sometimes, stops me right in my tracks. I have a feeling that that image of the swarming colony of ants is going to stick with me for a bit.