My grandfather was a stubborn man. He’d always had a rebellious streak, and a quick laugh, and a sharp temper. I have distinct memories of him visiting us in Missouri, when we were young children. While Grandma made home-made donuts in the kitchen, he sat with us to play dominos or cards, cracking silly jokes that made us laugh, spouting nonsense.

“Well, I’m about to play my eight. You know what they say. Eight, skate, and donate!”

It was hard to watch him, there at the end. I had just received my mission call, and he had been a big part of my life the last several years, ever since Mom and Dad’s divorce. He’d been there for all of the key moments, along with Grandma. When we left Missouri, he gave us a place to live at first. When my step-father grew abusive and the later divorce got ugly, he and Grandma kept Sheri and I distracted and out of the courtroom. They were there at each of my Priesthood ordinations, when I starred in school plays, and when I graduated high school. In a few weeks, I’d be leaving for two years, to Philadelphia, Pennsylvania. But tonight, I sat at Grandpa’s side in the hospital.

“Chad. Chad-a-lad.” He called out softly, his voice thick with confusion. Just a few hours before, he hadn’t recognized me, I’d been a complete stranger to him. He was in and out of lucidity lately, the dementia setting in. Earlier today, he’d thought he was back on the farm as a child, and in the afternoon, he’d assumed he was in a bathtub on an airplane in the sky. It was heartbreaking to see him like this.

I got up out of the small twin bed they had wheeled in next to his hospital bed. “Hey, Grandpa, I’m right here.” I placed a hand on his arm, squeezing slightly.

“Chad, I have to use the bathroom,” he said. I took two steps toward the bathroom and turned on the light there. After my eyes adjusted, I found the small bottle they were using to collect his urine and returned to his bed.

“Of course, Grandpa,” I smiled.

“I hate that I can’t do this myself. I’m not some child.” His voice took on a tone of derision as I pulled his blankets and sheet down around the bottom of the bed. He had only one full leg now, the other having been amputated at the knee a few years before due to complications from diabetes. (His prosthetic foot and wheelchair both sat against the wall at the opposite side of the room).

“You’re definitely not a kid,” I reassured him, not knowing what else to say. I helped him fold his hospital gown up, so he could access his genitals, then helped him line the bottle up. He took it from my hands. “I can do this part myself,” he said with anger.

I turned my back, respectfully, as he prepared to pee. This was my fourth night in a row sleeping here in the hospital with him. I worked just downstairs, in the cafeteria, and it was easy for me to come and spend the evenings here. Grandma had asked me if I was sure I wanted to stay again, and I’d told her that I absolutely wanted to, it was the only thing I knew to do to help. She was home sleeping now and would be back first thing in the morning, along with another steady stream of company, some who Grandpa recognized and others who he didn’t, depending on how lucid he was throughout the day.

“Oh, shit! Oh, damn it all to hell, I can’t do anything right!” I swiftly turned back and saw that Grandpa had missed the bottle, sending urine spraying all over his hospital gown and sheets. Feeling heartbroken for him, I stepped into the hallway and flagged down the nurse, telling them what had happened inside.

Thirty minutes later, in fresh bedding, Grandpa went back to sleep, and I took a seat back on the bed, unsure if I’d be able to sleep again. I had a stack of comic books near the bed that I could read, but I didn’t know if it would help.

Grandpa had been such a proud man. Now he lay next to me, one leg gone, humiliated over being unable to pee by himself. He had tubes and wires connected to him, monitoring him. He was in his early 80s, and this wasn’t how he wanted to be, not at all.

In these later years, Grandpa’s life and been dominated by struggles with diabetes and heart disease, exacerbated by other health struggles. A few years before, he’d survived major heart surgery, yet on the drive home, Grandma had been in a horrible accident with Grandpa in the car, one that broke her neck (she recovered well) and put them both back in the hospital. But Grandpa had started declining after that.

Growing up Mormon in a small Idaho farming community, Grandpa had lost his father at a young age. He was the youngest of several siblings, and he’d grown up as the man of the house, supporting his mother however he could while balancing his life with just a bit of rebellion; he’d never served a mission, had had a habit of smoking, and he could be quite the prankster. Then he’d settled down with Grandma and, over the next five decades, raised four daughters and a son. He was a good dad, and a wonderful grandfather, despite that temper of his, one that lit quickly and burned out just as fast, and he was beloved by his family. He would be very missed once he was gone.

I dozed for a few hours, and the next morning, Grandpa didn’t recognize me again, wondering why there was a stranger in his room. I left, to shower and sleep a bit before I had to work hours later, and I couldn’t get him out of my mind. I thought of how he would put his small granddaughters on his feet and dance around with them while singing, how he took Sheri and I to the Dutch Treat Cafe for French fries and Iron Port Cherries, how he came over on Saturday mornings after our move to make us pancakes, how he’d pop his dentures out at his grandkids to scare them. What a life he’d led, and what a legacy he’d left behind, with five children, a few dozen grandchildren, and even more great-grandchildren. What a simple, happy, profound life he had lived.

Grandpa died just a few days later. He was surrounded by his wife and children. I wasn’t in the room. The last words he’d spoken to me were, “Hey there, Chad-Boy.” He’d spoken to me after not recognizing anyone else for hours, his eyes settling on mine, speaking with a smile as he pointed his finger right at me. He went peacefully, his breathing slowing, his eyes opening wide to something unseen, some vision of whatever lies beyond. He smiled, he closed his eyes, and then he let go, leaving his body behind in a room full of people who loved him. 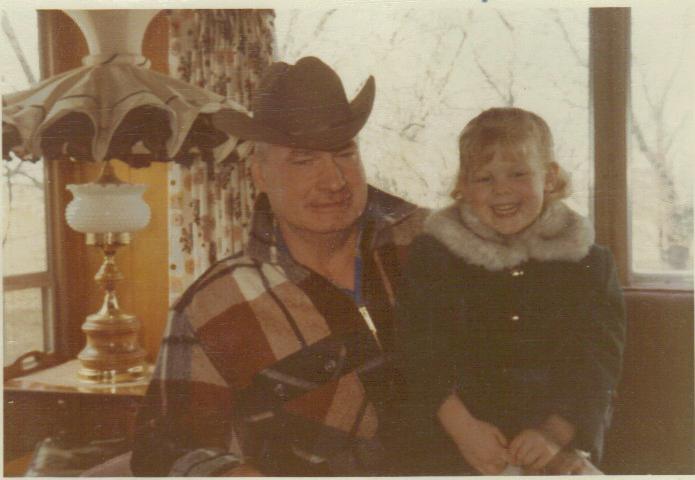