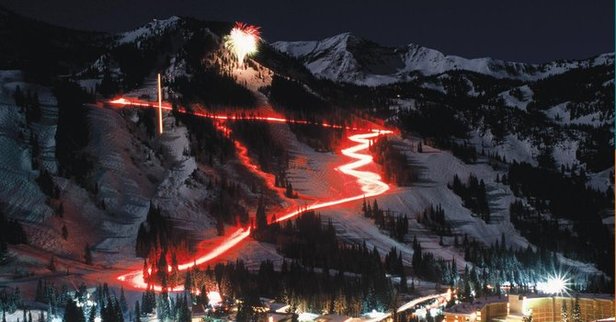 The snow drizzled down in wet dollops, and I wondered if it was fake, being shot out of a machine from a hilltop nearby. But it kept falling, heavier, collecting around my feet and settling on the trees. By morning, there would be a few feet of powdery, wet snow.

I stood facing the mountain, bundled up in a heavy coat, a snow cap pulled down over my ears. I clutched A, my 6-year old, close, to keep him both warm and safe. Next to me stood my boyfriend, Mike, his hands in his pockets. At his side was my nine-year old, J. We huddled together in front of a campfire, one built in a circular tin. There were hundreds of people on the platform, all in coats, scarves, and hats, many with young children. Some wore festive gear, like light-up Rudolph noses, Santa beards, or elf hats, and many clutched plastic cups of white wine or champagne in their gloved hands.

The night wasn’t going exactly as I’d hoped. When I booked the expensive room at Snowbird resort, I’d been planning a romantic getaway for Mike and I, one with wine, a nice suite, a hot tub, and a fancy dinner. It was Christmas Eve, after all. But the ex-wife had crossed wires a wrong way, so suddenly, there we were, my sons with us on our evening out. Santa had already visited that morning, on Christmas Eve, a regular occurrence for my sons who have two Christmases in two homes. Thus, with a mantra of “if you can’t beat ’em, join ’em”, playing in my head, I just packed the kids up to the resort with us.

When the fireworks started, a teenage girl nearby began jumping up and down in obnoxious excitement, putting on a show for her friends. “Oh my god, you guys, the fireworks are starting, yay!” Her jostling knocked me backward a bit, and I had a mental vision of knocking my son into the tin can fire. I spoke up loudly.

“Hey, please don’t jump! There’s a fire here!”, and the girl looked as if I’d punched her in the face.

“I would never hurt a kid!” she said, defensively.

Her friend, a burly teenage boy, put a hand on her shoulder, turning her toward him. “Hey, come on, it’s not worth it. It’s Christmas.” They turned away, acting as if I had just started a fight, and I could do nothing but role my eyes, and console my son, who always grew worried when there were angry tones.

The fireworks flashed in the sky. I bent down to whisper to my son, “I bet you’ve never seen fireworks in the snow!” before realizing he was plugging his ears to avoid the sounds. I looked at the other son, whose face was bright red as he shivered.

Soon, a string of red lights began appearing at the top of the mountain, slowing winding into a long line as the fireworks blasted overhead. Skiers had headed to the mountain top and were headed down the mountain in a procession, holding red electric torches, forming a gorgeous, bold, crimson line that arced into a short zigzag toward us. The snow continued falling, and then Santa’s sleigh, bedecked in green and red lights, began flying down toward us, a modified version of the ski lift. I excitedly pointed up to the kids, showing them that if they squinted they could see his red suit and waving arm, but they were too cold to enjoy it.

The show lasted ten minutes. Santa landed and handed out candy canes. The skiers put out their torches. And the fireworks finished with a beautiful booming resonance, leaving evanescent plumes hanging in the dark, snowy air. Both kids were begging to go inside.

Thirty minutes later, the four of us squished in around a wooden table in a fancy restaurant. Old timey Christmas songs played on the loudspeaker. The kids drew Pokemon on the backs of the menus with broken crayons, soon ordering macaroni and cheese and chicken nuggets, at $18 per tiny plate. Mike and I ordered delicious red wine. He got crab and steak while I ordered the only vegetarian option on the menu, some savory mushroom concoction that left me hungry. Dinner took nearly two hours, and the kids, though well-behaved, began to almost pass out in their seats.

Coats and hats back on, we trudged up the hill back to our hotel. We’d been downgraded from the fancy suite to a standard room because of the kids. We slipped and sloshed up the hill, which was covered in inches of snow, and the kids began crying with exhaustion and cold, but in no time we made it. We collapsed into the bed of our substandard rooms, and I contemplated the dual reality that I was thrilled to have my sons with me, anytime and always, yet how very different this Christmas Eve night without them might have been.

The next morning, as we waited for the plow to come and pave a way out of the parking lot for us, I contemplated the hotel’s terrible coffee and how badly I needed a nap. One kid had a small anxiety attack about never getting out of the snow while the other consoled him. I held my boyfriend’s hand, remembering fireworks, red torch lights, wet snow, tin campfires, and jumping drunk girls, then compared it to the previous Christmas, when I had slept and awakened alone.

As we drove down the mountain, taking turns choosing Christmas carols to sing, I thought how maybe this wasn’t such a bad Christmas after all.