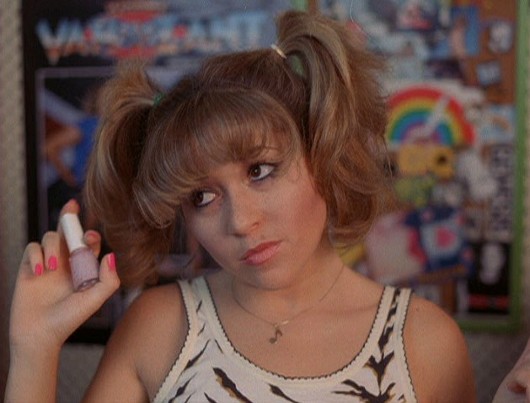 “We are, like, legitimately being abused. I mean, like, our grandmothers told our mothers to be nice and, like, trust strangers, or whatever, but that doesn’t apply when there is, like, significant trust being abused.”

Her voice sounded like the voice Nasim Pedrad used to use on Saturday Night Live to parody Kim Kardashian. Pedrad’s face would barely move as she spoke and her voice took on a nasal squeak to it, barely fluctuating in tone, making her sound like the snobbiest, snootiest girl I’d ever heard.

Except this girl wasn’t Kim Kardashian. She was heavy set and wearing sweat pants and a hoodie. Her blonde hair was pulled back tight into a ponytail, and she had no make up on. She was wearing a pair of black-rimmed glasses and eating pupusas with her girlfriends at 4 pm on a Sunday. I couldn’t see her friends’ faces from my vantage point one table over, where I sat with my boyfriend, but they were also in sweat pants and hoodies, a bit overweight, with ponytails. I assumed that was their Sunday trend.

“Like, okay, I realize that we weren’t actually dating, right? We were fucking, not dating. But, like, still, he knows who my friends are, and he, like, knew that I hang out with Terry sometimes, and I heard him, like, say that he, like, wanted to get with her. He, like, thought she was sexy and would, like, say that to me. I mean, that it itself is, like, abuse, right? But then, he, like, fucked her! And, like, just casually mentioned it to me like it was no big deal! I know, right?”

I leaned in across the table while shoving a delicious bite of garlic-and-mushroom pupusa into my mouth and made eye contact with the boyfriend. I indicated a fork silently at the girls behind him. “Oh my god, this is delicious,” I whispered. He looked up, thinking I was indicating the pupusa, then realized I was eavesdropping.

I took another bite without looking, my eyes wide on the exchange. This was the most delicious soap opera I had witnessed in some time. The girl’s voice kept rising at the dramatic parts, and she was using her fork to indicate points for emphasis. I looked back at my boyfriend, my eyes wide with enthusiasm, and he simply nodded and smiled patiently. He knows the side of me that likes to eavesdrop on occasion, and he knew I was already planning a blog as a result from all of this. I leaned in and whispered again. “I mean, I’ve heard of valley girls, but these are Valley. Girls.” He just smiled and nodded, taking a bite of beans with sour cream and guacamole. All of the like and legit and genuinely and legitimately and abuse words being tossed around were filling me with joy somehow.

“So, I’m pretty sure I’m swearing off men. I mean, like, that is the only solution for a while. I mean, except for the guys I’m casually seeing, they don’t count. But I’m not going to, like, actually go on a date for, like, a while. I mean, why would I do that when guys clearly can’t be trusted? I mean, this is just the latest example. Clearly, I have a lesson to learn here. Otherwise I’ll just, like, keep getting hurt.”

My eyes widened and I looked back at the boyfriend. I leaned in and whispered. “Hey! Do you remember that one clip from the Inside Amy Schumer show where the white girls are gathered around the table and one of them keeps talking about how the universe is trying to teach her things? Her car breaks down in front of a juicery or something and she is telling her friends about how the universe was trying to tell her she needed to drink more juice? And the point of the skit is that white girls are the worst? This is that! These are those white girls!” He smiled and nodded, taking another silent bite, and I was already looking back at the other table.

“We can be, like, a sisterhood. Cause you girls are there for me. I mean, like, what would I do without you?”

As the girls gave each other a little half hug with arms around the table, I noticed the three baskets of tortilla chips and three cups of salsa they had been munching on, and suddenly they were a little bit adorable. This was a screenplay. Three girls in their 20s eating what they considered to be ethnic food, wearing sweats and hoodies on a Sunday afternoon, and discussing their latest heartbreaks, calling it abuse because they had learned that one of the guys they were ‘casually fucking’ was ‘casually fucking’ someone they knew.

The boyfriend and I finished our pupusas and stepped back outside on the streets, where a large gathering of homeless people occupied one street corner of the Mission District. We walked past them, commenting on the bizarre concoction of concrete, Mexican food, body odor, urine, and cigarettes in the air.

“I think I might love San Francisco,” I said as I grabbed his hand and no one noticed. “I’m not sure I could live here, but I think I love it.”