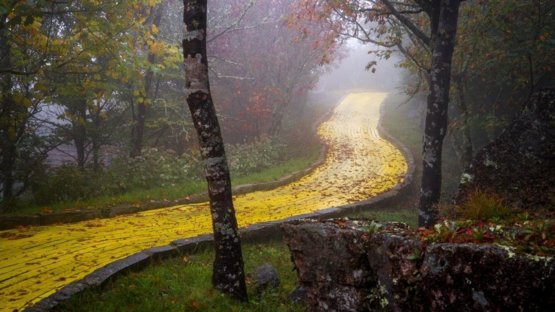 My sister’s home was built in the 1880s, she thinks. It’s a nice two story apartment with a basement. She won’t go down there because she’s afraid of bugs. The home is drafty and pretty with strange placements for light switches: the light for this room is on the opposite wall, the light for that room at the bottom of the stairs.

I didn’t get a good look a the street outside, it was too dark. But in the morning, I’ll go for a long hike around the area. I’ll see giant stone buildings, long concrete stairways up to sun decks, beautiful open yards. Everything feels old. And cold. The trees have already lost their color as fall shifts to winter, and the sun is down at 5 pm.

Everything in Massachusetts feels older, colder. It has a density to it. A history. It’s different than Utah, different than the Rocky Mountain regions I’m so familiar with.

It’s quiet outside and I’m laying on an inflated air mattress. I have three blankets on me, as well as a sheet, and I’m still cold. The air is drafty and I can’t quite get warm. I feel selfish for being cold. I feel cold and old like the place around me.

I give so little thought to the comforts in my life, and to their origins. Synthetic fibers and animal parts were harvested and crafted to make these blankets, in machines built from metal, housed in buildings made from wood and stone. We men, we have cracked the Earth open, bashed it apart. We’ve felled trees, split stones, slaughtered creatures. We’ve poisoned down and around and above. And here I lay, cold and old.

I have a right to be cold and old, I remind myself. But lately I’ve been feeling a sense of dread. I’ve read theories that the world is doomed to fail. We’ve warmed the Earth, melted the ice bergs, fracked the ground apart. We’ve ripped up rainforests, depleted the oceans, killed the bugs, and genetically engineered animals to dangerous levels while driving others to extinction. We’ve doubled our population in a generation. We are killing the planet.

I’m just one, just me. But I walk on pavement, burn gasoline, run up my electricity bill, shower in hot water, breathe out carbon dioxide. On moments like this, laying cold under blankets in a drafty stone and wood building from the 1880s, it’s moments like this that I feel responsible. I didn’t build the roads, but I walk on them. I didn’t shape the metal of my car, but I drive it. I didn’t lock the chicken in the cage, but I eat its eggs even if I don’t eat its meat.

As I child, I read the Wonderful Wizard of Oz by L. Frank Baum. He created a fairy tale world that little girls and boys might want to be a part of, and he explored the land in over a dozen books. It was a simple place, and he made it decades before Judy Garland would immortalize it in the seminal movie. There were witches, legions of nome creatures, talking animals, patchwork girls, mechanical men, and men made of tin and straw. Humans from Earth could only reach it by hot air balloon, tornado, or earthquake. There were magic belts and mirrors and books, silver shoes, secret princesses, roads of yellow brick, and a powder that granted sentience to whatever it was sprinkled on. And there were entire lands within dedicated to puns, full of talking rabbits, glass dolls, and silverware. There were adventures and intrigue, yes, but the good guys always won, and no one could die. They could be transformed, imprisoned, even chopped up into pieces, but no one could die. There were four lands, each a different color, with the Emerald City in the center, a city where everyone wore green-tinted goggles to make everything look emerald.

It filled my mind with wonder. Kids from Earth could escape there, but not many did. Dorothy did, and she took her dog and her chicken and her aunt and her uncle. Button Bright did, and the Wizard, and Zeb with his horse Jim, and the Shaggy Man. I never wanted to escape there, but I liked the idea of it being there, just knowing it was there in pages, ready for me to escape to whenever I wanted. Nine decades after Baum wrote the books, they would let my mind escape.

As I got older, I escaped to Oz less frequently, but other lands captured my mind. Fictional universes almost always seemed preferable to the one I lived in. As a teenager, comic books dominated my thoughts, and I kept my brain constantly occupied with the far away and imaginary.

With thoughts of Oz on my mind, I realized it was only a template of this Earth. There were still villains. And someone had to mine the emerald for the city and the silver for the shoes. The yellow bricks had to be crafted out of something. Baum, perhaps, was distressed at the way the world was then, and created something easier to escape to. A world where no one died.

As an adult, other fictional worlds occupy my mind, ones that feel far too frighteningly close to home. White male Christian dominated misogynistic rape cultures in Handmaid’s Tale, and zombie apocalypses where people do horrible things to each other to survive in Walking Dead, and everyone obliviously fights to the death while the world ends around them in Game of Thrones. This world feels like a horrible composite of those. I sometimes just want the innocence of Oz back.

As I drift off to sleep, I think about how different things are now from when I was a child. The world has transformed in a generation. Medical science, gay culture, technology. In 30 years, everything is different. And I feel my fingers grasp at atmosphere, hoping to clutch on to a bit of hope and strength, that maybe it might not be too late for the world, that maybe we can change things just enough to avoid the disaster we seem to be facing, that perhaps my sons might grow up in a place a bit more like Oz.