Bev loomed over the table, hands on hips. “Ready to order?”

I did one last quick scan of the menu. “I’ll take the ‘Paradise Veggie Burger. Can I get it on wheat bread instead of a bun? And is a side of cottage cheese possible?”

She moved her tongue against the inside of her cheek and nodded. “Yup. Lettuce, tomato, pickle okay?”

“Yes, thank you.” I handed her my menu as she took the orders from Jason and Dave, my colleagues there on a work trip for me. Without another word, Bev turned back toward the kitchen to place our orders. She was a large woman, in black pants and a white shirt that was likely supposed to be tucked in. She had on heavy foundation but no blush or lipstick, and her dyed-red hair was slicked back. She was probably 50 years old, and had a wedding ring on her finger.

We made small talk as we waited for our order, and I recounted some of the stranger happenings during the day there in Fillmore, Utah, a small town just off the freeway in the center of the state. Earlier in the day, I’d stopped at a grocery store called Duane’s, one that still had a video check out counter, where the cashier had nearly fallen asleep while ringing up small purchases. After that, needing some electronic supplies, we had entered the local Radio Shack only to find some sort of craft store within. When we’d asked the woman working about it, she’d informed us that “Radio Shack went belly up years ago. We just haven’t taken the sign down yet.” Instead, we’d found our electronic supplies at a little home business that advertised computer repair, except the sign out front called it ‘Computor Repair,” making all of us chuckle.

Bev soon returned our plates of food. I placed my requested vegetables on top of the veggie patty and tucked the slices of bread around it, taking a hearty bite, and it was good if not great. We were at the only sit down, non-fast food restaurant in town, the Garden of Eat’n, and when we entered, Dave made the joke that the owners must be Adam and Eve, to which I responded that Adam and Steve were more likely. The place was nearly empty, except for a few older cowboys, and the four employees we had seen, including Bev, all looked as if they would rather be any place but here.

We continued chatting as we ate, then I took a spoonful of cottage cheese and placed it in my mouth. It… bubbled. It tasted carbonated, almost like it had been soaked in Sprite for a bit. It was odd, a bit sour, and popping. I set my spoon down, disconcerted.

“Oh, something is wrong with this.”

Jason leaned over and took a small bite of the cottage cheese from his fork. “Oh, yeah, that’s bad. That’s expired.”

I’d already swallowed the bite I had taken, which caused me worry as we had hours of work still ahead. I raised my hand into the air, signaling Bev.

“What is it?” she asked without smiling.

“I, um, I think the cottage cheese has gone bad.”

She reached down and plucked the bowl of my plate. “Yeah, I thought that might be the case.” Then she turned toward the kitchen to return it.

Jason and I made eye contact and he immediately started laughing.

“Wait, did she just admit she knew the cottage cheese was bad but she served it to me anyway? What–why would she–did she think I wouldn’t notice?”

Bev returned with a dish of cole slaw, one that was mediocre but I ate it all more out of necessity than hunger at this point. And soon she brought our check, plopping it down on the table without asking how our meal was or if we enjoyed our service.

I took the receipt up to the checkout counter where Rose, a skinny raven-haired 20-something took it from my hands, and asked, without inflection, how everything was.

“Um, it was fine, except I was served expired cottage cheese. Except I think she knew it was expired and served it anyway.”

Rose didn’t look up, processing the transaction. “I’m real sorry about that, want to leave a tip on the card?”

I had nothing to say to that, so I simply walked out, ignoring the jibes of my colleagues, though I was laughing myself. I nodded at them, telling them I was going to grab a cup of coffee before meeting them back at the station.

I walked across from the Garden of Eat’n to a gas station, where I found four pots of coffee inside. I found the attendant unloading boxes in one of the aisles and gave him a smile.

“Hey there, which one of these coffee pots is the freshest?”

The man’s expression shifted from a smile to a look that could only be described as “I-just-ran-over-your-dog-and-I-don’t-know-how-to-tell-you”. I grimaced, and he gave a grimace back, and I decided that maybe i didn’t need coffee after all.

As I walked out of the gas station, a woman walked in, and I heard the man enthusiastically greet her. “Hey, Lorraine, don’t forget Relief Society is tonight!”

And I couldn’t help but laugh out loud, somehow charmed by this bizarre life in a small town. Then I tasted the cottage cheese again and my smile left. 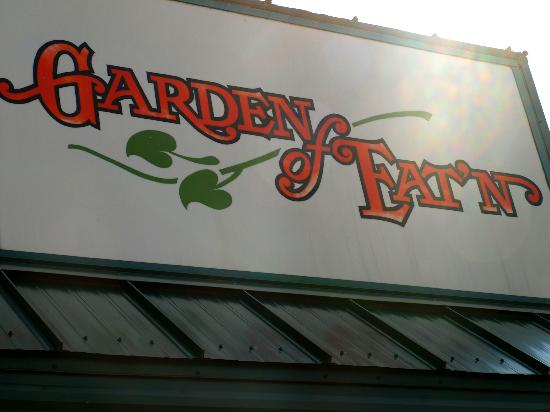