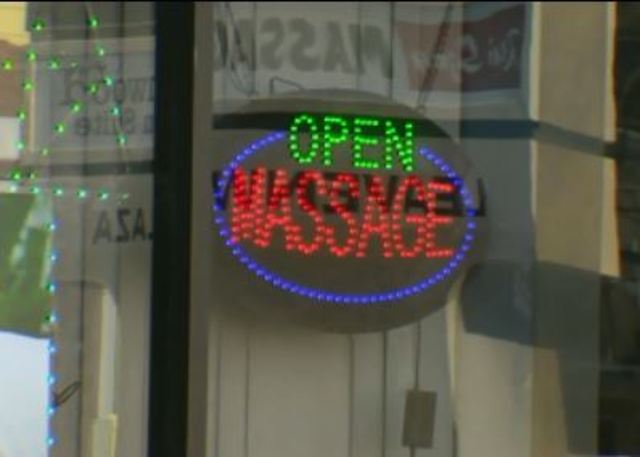 Walking the rainy streets of Boston, I had been exploring the campus of Harvard University all morning before I decided to walk the surrounding neighborhoods. I was enjoying the rich architecture, the cobblestone streets, the people watching. But it was cold and I was a little sore from yesterday’s flight, so why not get a massage. It’s okay to treat myself from time to time.

I walked into the little store front where the red sign advertised a massage. There was a fish tank and some kitschy decor. Up a few stairs, there was an Asian woman who I later learned was from China. Her hair was in two long ponytails. She was a little overweight and had a shirt on that exposed her shoulders, covered her breasts, and then hung open on each side while hanging loosely down the front, meaning you could see both of her sides but not her stomach. She gave a wide smile and had several gaps in her teeth.

I introduced myself and inquired about rates. I opted to get a “foot and scalp massage” for 30 minutes at the reasonable rate of $40, and Winnie enthusiastically led me to a back room where I took a seat in a plastic covered chair. While my feet soaked in deliciously hot water, she worked on my scalp, neck, and jaw, and it was heavenly. Soon, she began working on my feet, using her strong hands to find every possible sore spot.

Winnie made small talk with me during the massage. I chose my words carefully as she only had limited English skills. I learned she had moved to the United States three years before and that she had two children at home, that she had a mother back in mainland China, and that she thought America was too cold.

She asked me questions as well, and she responded with far too much enthusiasm when it was clear she didn’t understand many of my words. And she flirted with her words. A lot. Something she must have figured that America men wanted from her. “What you do for work? Oh, a counselor, how nice, strong handsome young man!” and “Oh, you from Utah, there many strong young boys there like you!” and “Oh you have some kids! Handsome young boys grow to strong man like you!” When I mentioned having a boyfriend, she didn’t quite seem to understand. “Oh a boyfriend, good for all the beautiful girls,” she replied.

While working on my neck, Winnie offered me a discounted rate on a body massage, and I agreed. So after the 30 minutes were up, she led me to a back room and instructed me to lay down on a massage table that was covered only by a sheet. There was no towel or covering, so I stripped down to my briefs and laid face down on the table.

Winnie rolled her hands and elbows over the prominent knots in my shoulders and back, legs and arms, continually commenting on how strong I was, how handsome and young. It started out funny and then just got annoying due to the frequency. It was an awesome massage, so I just stayed silent.

Then Winnie climbed up on the table and straddled my hips as she dug in. “You so stress, so tired,” she said, digging her elbows into my back. “You need woman like me to relax.”

Winnie slid off me and began working on my hips, muttering the word “handsome” and giving a little moan. She then grabbed the briefs and began yanking them down.

She tried reaching under my hips. “Like me to–”

Winnie looked at me, confused, and then walked out of the room. As I dressed, I had to laugh to myself. Had that just happened? Is that what–is this her life? Men come in and– Is she paid for–? Her shirt, the unending flirtations, the reputations of Asian massage parlors. I buttoned up my shirt and slipped on my shoes. I glanced at my phone. It was 2 pm on a weekday. Good lord, what was this place like on an evening or a weekend?

I slipped my jacket back over my shoulders. I felt relaxed and tense at once. I got my wallet out of my pocket, wanting to get out of there in a hurry. Huh. It really had been a great massage.

I walked out into the lobby and saw Winnie standing at the same counter. While she had greeted me with a happy expression, she now stood there impatiently. Her arms were folded tightly and I could still see her sides from where the shirt opened up. She had a stern look now and her ponytails seemed almost comical with this expression.

“Yeah, of course.” I muttered, flipping through the bills in my wallet.

“Um, no, the massage was great, but I didn’t want– you know what, never mind. Here you go.” I handed her six twenty dollar bills, enough to cover the massage price, 100, plus a 20 dollar tip.

I laughed loudly this time at her strange mix of boldness and audacity. I stepped toward the door.

“Excuse me? That’s a twenty per cent tip on a weird experience.” I opened the door.

“Twenty per cent not enough! You give me bigger tip!”

Winnie shouted out at me as I stepped into the rainy streets, struggling not to laugh at the unintended innuendo.