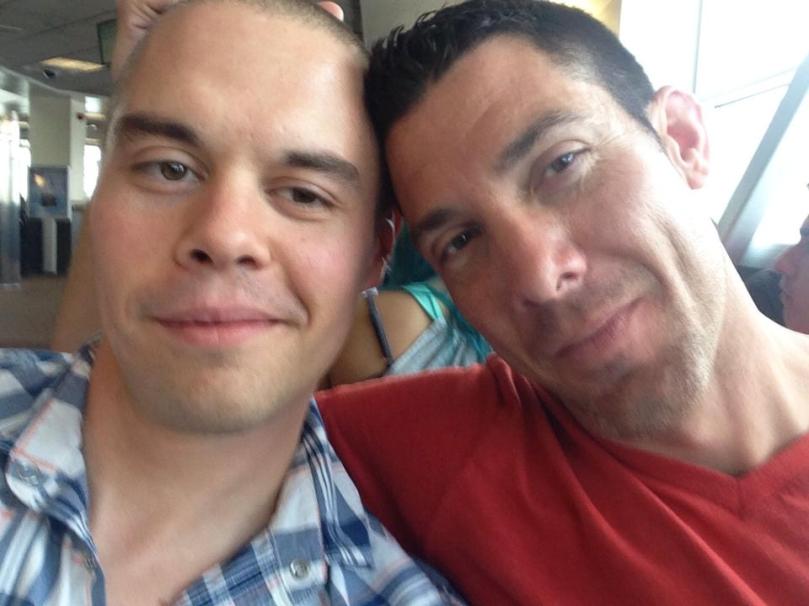 When Steven first knocked on the door, my hands were dripping with dish water and I had my infant son on one hip, an image of a harried domestic housewife in a rush. I was living with my sons in a small two bedroom apartment in Salt Lake City, with a roommate who also had two sons living in the second bedroom. I was poor and working at a terrible job, but I was 32 and just barely beginning my life as an out gay man.

Once a month, my roommate and I hosted a support group at our home for gay fathers, the majority of the men were formerly Mormon and newly out of the closet, many of them still married to their wives, and many of them not even out to their families yet. We would get together and talk, process through our experiences and offer support to each other during such a difficult transition.

And so there was Steven and my eyes went wide, cause this guy was handsome, and there  I was with a literal baby on my hip. He was tall, in incredible shape, and with a bright wide smile. He stepped right inside, all confidence and laughter and swagger, and the kind of energy that leaves you a bit flummoxed at first. He was also 90 minutes early for the meeting.

Steven came in and we became fast friends as I rushed around the kitchen and living preparing for the meeting. I shared a bit of my story with him, how I had just come out months before and moved here, and I introduced him to my children. And Steven told me his story, much of it like mine: growing up Mormon in another state, getting married young, and having two children with his wife. Steven had been deployed in the military before coming home and getting his professional certifications. Now he was in Salt Lake City, starting his life over, and figuring out what it meant to be gay and happy in his own skin. He stumbled over the word gay that first time, having to stop himself and breathe a little bit. “It just feels weird to say that out loud to someone, that I’m gay.”

Over the next few weeks, I saw Steven go through his firsts, the same firsts I had been through just months before. I introduced him to a gay swim team I had joined (and laughed hysterically when one of my friends leaned over the first day Steven donned his swimsuit and whispered, “Good God, you’re friends with a porn star!”) and watched him make friends (something Steven does easily, because he is hilarious). I took him to his first gay club and watched him stand in the corner, shy and making casual conversation, until just a few weeks later when he joined the dance floor and let go. Steven called me the first time a guy asked him out, and I had to explain to him that it was a date, and then he called me glowing after that first date with a guy, glowing and twitterpated, because he had had his first kiss. And then, dozens of months later, he called me in anguish the first time he had his heart broken.

A few years after Steven came out, when my baby was no longer a baby but now a fat and clumsy little toddler, a large group of us went down to Moab, Utah, a small resort town near the border of a few national parks, for their annual Pride celebration. My best friend Kurt and I shared a hotel room and connected with our other friends for drinks and dinners during the festivities. One day, Steven and his then boyfriend hiked miles up into Arches National Park so they could be near the famous Delicate Arch at sunset. The two men stripped down to a small pair of pink lacey ruffled panties. They both strapped small white angel wings on their shoulders, pink garters on their muscular legs, and pink feather boas around their necks. And then, in angelic and athletic poses, they stood against the red rock arches with the sun setting behind them and snapped photographs as the tourists nearby gawked and cheered.

When I saw the photos later, I remember laughing with abject delight, and contemplating the swift differences in our lives in the short times we had known each other. All of the building blocks of our lives remained the same: we were still dads, we still had the same jobs, we still had the same families… yet now we smiled with our whole hearts, we had authentic friends, we genuinely liked ourselves, and sometimes we danced under strobe lights or wore pink panties against setting suns just to say that we had.

This morning, I had coffee with my friend Steven for the first time in a few months; this time, my baby isn’t a baby but a prolific and hilarious kindergartener. Steven and his partner live in a beautiful house on the hill now that is just perfectly them. There is a large deck with comfortable chairs that overlooks the city, and you can sit there and sip espresso as hummingbirds flit around the feeder above you. We talked about our jobs, and our kids, and about co-parenting. We talked about the projects we are working on, about places we hope to travel this year, and about mutual friends. Several times during our conversation, Steven made me laugh out loud with his deep voice and his scandalous stories, just a bit too risqué for public spaces.

I gave Steven a giant hug goodbye, and I sat in my car unmoving for a few minutes, remembering just a few short years ago when he knocked on the door, frightened to even use the word gay, and remembering my own fears back then. I felt the last handful of years flash by for a moment, grounding me in the present, on a journey with unknown adventures ahead, and with some of the most incredible men a guy can have at my side.

(Thank you for the laughs and adventures, Steven! You number among my very favorite people. 🙂 )