As I sat in the coffee shop just before I was supposed to meet Jeremy (not his real name), I scrolled back through our text messages from the few days previous, remembering the details we had exchanged about home towns and jobs and hobbies.

Jeremy seemed like a quality guy: he had a stable job, he owned a home, he had an adorable dog, and he took care of himself. I scrolled through the photos he had sent after we met on an online dating sight. He had brown eyes, a wide smile, and seemed to be in great shape. After a few days of chatting, I had asked him out for coffee and he had responded with an enthusiastic “YES!!!” that made me laugh.

Jeremy had also checked all of the boxes that I had: he was single, emotionally stable, communicative without being standoffish or needy, funny, he liked the fact that I had kids, he wasn’t in a rush for a relationship, and he didn’t live hundreds of miles away (this had been a problem for me more than once). It was coffee, nothing more nothing less, and I was actually excited about this one.

My phone dinged and I looked down to see it was 6:15. There was a message from Jeremy. I smiled, thinking he was telling me he was running late, then I grimaced instead.

“Hi Chad, I was really looking forward to meeting you tonight and I’m glad we chatted the last few days. I was reading through our messages just now and I realized that I’m just not emotionally equipped to have a conversation with someone new right now. Work was just too stressful today. You seem like a great guy and maybe I’ll contact you in a month or so when things settle down. Sorry. Jeremy.”

My mind went instantly calm, but I could feel myself clenching my jaw. I took a long sip of my drink and then sighed. Okay, I told myself, this is not your thing, this is his thing, and it’s just coffee. This isn’t even someone that you know and it’s no big deal.

I briefly considered texting back, but instead just closed my phone. A text cancel 15 minutes after the meet-up time was rude at the very least, even if he was a really good guy. A bit frustrated now, I considered how to spend my suddenly free evening, and, after finishing my drink, took myself for a walk. I laughed and then cursed as I heard my friend Billy’s voice in my head, teasing me that I have the super power to attract any handsome guy in a ten mile radius who is either major drama or has major emotional problems. #### you, Billy, I thought with a smile.

As my feet moved, my head started spinning with the human panic and shame that sometimes comes with rejection. Six years of this! Six years of guys who don’t message back! Six years of chatting only to have guys fall silent or only want sex! Six years of first-time meet-ups, sitting across from someone while you size each other up, is he good looking enough stable enough interesting enough funny enough! Six years of second or third dates followed by an ‘I’m not interested’ or ‘I’m getting back with me ex’ or ‘I’m not out of the closet yet’ or ‘I should have told you I was married’ or ‘I just got out of a psychiatric facility’ or ‘I don’t like kids’ or ‘I’m currently unemployed’! Six exhausting years of this!

I was mad now and walking more quickly. Not mad at Jeremy per say, because whatever, I don’t even know him, but mad at the emotional energy dating sucks out of you. Six years. Why do I keep doing this to myself?

I rolled my eyes at the sky and slowed my breathing. I was a human having a human reaction to something that on another night wouldn’t bother me at all, but this time I was annoyed. It was only recently I had decided to try my hand at dating again, after a difficult breakup from someone I had loved, and it was the same old games all over again. Like every human, I needed a chance to get mad for a minute, and I’d had my minute.

I took a minute to remind myself that I’m not the only one who goes through this in dating. Men and women of every age get lonely, try to meet someone, get sick of trying to meet someone and take a break, try to meet someone again, and get their heart broken all the time. And, just like me, they in turn break the hearts of others sometimes. I see humans who completely despair when they are rejected. Someone doesn’t show up for coffee and they go on a long spiral of self-shaming, calling themselves pathetic and hopeless and unlovable and destined to die alone, all over something as simple as a cancelled date.

I sat down on a park bench and thought things through. I needed a bit of self-care tonight. I didn’t know of any friends who were free, so instead I decided to treat myself to a movie. There was a theater nearby, so I walked in and purchased myself a ticket and had a brief moment of oh my god instead of being on a date you’re at the movies by yourself before I calmed the voice and exhaled. No, I wasn’t going to give that voice room right now. I was going to enjoy myself.

I got an iced tea to drink and I found a spot in the middle of the movie theater, shutting down my phone so I wouldn’t be tempted to check it. I gave myself a mental pat on the back, happy with myself for self-care skills. I often travel solo, see movies by myself, and take myself out to dinner, and I find myself to be pretty good company.

As the previews ended and the lights in the theater dimmed, I sat up and looked around and realized I was the only person in the movie theater. I mean, I went to the movies alone, but this was a whole different level of alone in a city full of half a million people.

“God, damn it,” I muttered out loud, then folded my arms, furrowed my brow, sank down in my chair, and prepared to sit through a movie. 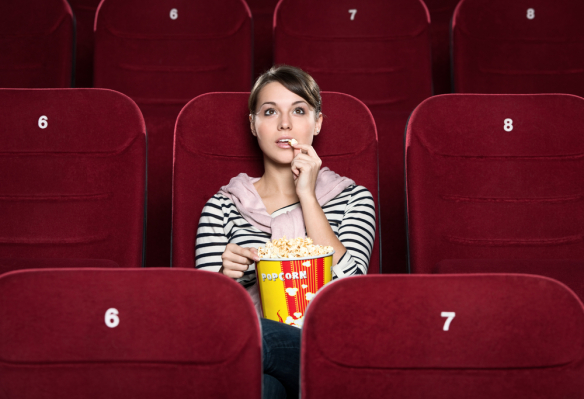 One thought on “Date Night For One”