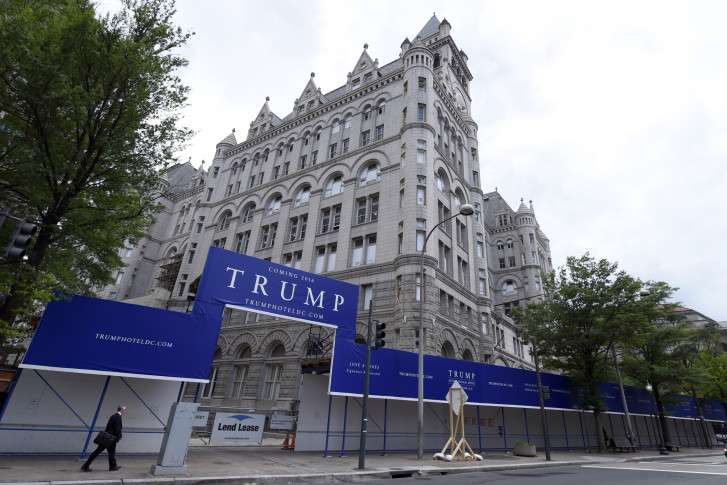 “Well, there it is,” the older woman said in her thick European accent. “Trump Tower.”

“Well, it’s more like a hotel. Do you think it will be used for hosting foreign dignitaries?” The younger woman looked sad as she said it, snapping a shot of the building on her phone. “I didn’t realize how close it was to the White House.”

“I’m sure many diplomats will try to stay there to impress the president. But maybe he will let them stay there for free.”

Both women stood thoughtfully silent for a moment before I chimed in. I had been standing nearby, on a long walk through the streets of Washington D.C. I had taken my own photos of the Trump hotel as they had been talking.

“I don’t think he will be letting anyone stay for free,” I scoffed.

The older woman laughed. “We can pretend. I’m trying to comfort my daughter. She is college-aged and living here in America currently.”

The daughter continued staring at the building. “I just can’t believe it is happening. I keep looking at all of the states, even here in the District of Columbia, and I see how the majority supports Hillary Clinton. How could this man have won?”

“Well, speaking for a lot of Americans, we can’t believe it either.”

I introduced myself to the two women, Annaliese, attending college locally, who was showing her mother Linda around the city. Both women were from Armenia. I explained that I was a tourist to the city also. There was heaviness in the air as we became basically acquainted. They asked what I had been doing in the city, and I told them about my adventures.

“And then yesterday, I went to the Holocaust Museum. Have you been?” I asked.

Linda looked down, a sadness heavy on her face for a moment. “I have no need to go there. My mother’s generation was that of the first genocide, the Armenian genocide.”

I couldn’t think of anything to say, and there was a pregnant silence for  a moment. Then Annaliese asked me what I thought of the museum. I looked back over at the Trump hotel, and sighed.

“The first part of museum was dedicated to the political circumstances at the time. It told of Germany, struggling with political sanctions after World War I, and how the economy was slow to rebuild and the people were dissatisfied. Despite all of that, Germany had a lot of cultural things happening. It was becoming a safer place politically for homosexuals and for women, for Jews and other religious groups. It seemed to be changing, slowly, for the better. And then Hitler happened.” Both women looked at me and seemed to want me to continue. “Watching those exhibits, I saw how Hitler surrounded himself with people who admired and emulated him, and how he used the plights of the average German to propel himself into power. He used propaganda and political loopholes within the German system to seize larger and larger pieces of political influence. He exploited crises to gain sympathy and seemed to operate on a message of ‘Make Germany Great Again’, and then he took over and appointed others just like him into positions of power. And then the world watched what happened next.”

Annaliese looked at the hotel and then at me. “That sounds painfully familiar.”

I nodded twice. “Yeah, the museum was extremely uncomfortable for me. I must have had 75 moments of ‘oh my god, that sounds like America right now’. Political campaigns built on propaganda that exploit the disenfranchised. Anti-immigrant, anti-Muslim, anti-women. Fear-mongering and gas-lighting.”

Linda stuffed her hands in her pockets, avoiding the cold wind. “And the rest of the museum?”

“Well, the rest of the museum was all that happened next. I cried lots of times reading about the people killed, and how they were killed, the people experimented upon, the ones who barely escaped with their lives. It was horrible. The museum was so beautifully built, and we must remember what happened, but it was horrible. I’m sure it was similar to the stories your mother told you of the Armenian genocide.”

We stayed silent for a moment again, and I felt the need to clarify. “Look, I don’t think we are headed for genocide in America. I don’t think that would happen again. But I do worry about what comes next for us. It’s a heavy time here after things have been going so well.”

The conversation lightened up for a few minutes and we talked instead of food and music and entertainment, of aspirations and climate and family. And then the women headed along their way, after having me take a photo of them in front of the Trump hotel.

I continued my walk then, past incredible buildings full of history. I saw names emblazoned in plaques and pavement: J. Edgar Hoover, Ronald Reagan, Booker T. Washington, Frederick Douglass. The sheer history of these streets. The sheer weight of the footfalls of the men and women here who have influenced a world’s destiny and changed billions of lives for better or worse, from right here on these streets.

I came around the bend and saw a few handsome Secret Service agents screening the credentials of four men and women dressed like Christmas carolers, admitting them to the White House grounds for some sort of event. I looked at a construction crew building a stage for the upcoming Inauguration of a new President. I watched a crowd of Americans gathered at the perimeter staring at the White House in all its grandeur, realizing, as I was, that it is just a building like any building, and a small building at that. A Muslim family stood arm in arm, the women with their heads wrapped, the men with heavy beards. A black mother held the hands of her three daughters, all in pink snow hats. A lesbian couple hugged each other tightly. An elderly father pushed a stroller while his daughter carried the child inside. We watched, all of us, the silent grounds around us, wondering in unison what the future holds.