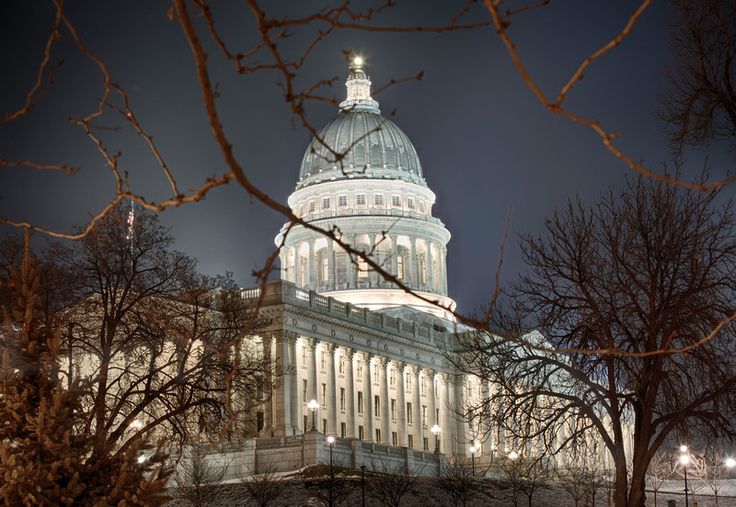 I arrived early to the rally and stood at the base of the large white monument, looming under the sky, electric lights making it shine up on the hill. I’ve always found the Utah State Capitol Building, at the top of Capitol Hill in Salt Lake City, to be a beautiful building, with an incredible view of the city stretching on for miles around. I’ve walked the grounds many times. But this time, I had a heavy heart, and a heavy clarity.

I stood at the base of the steps in the chill air and looked at the small monuments that have been built there, celebrating the accomplishments of the pioneers who settled Utah. It showcased hard-working religions men pulling carts and women in long skirts bearing and raising children, succeeding in taming the harsh wilderness. The accomplishments of white people in front of a white building. No mention of the slaves dragged behind them, no memorial to the Native Americans that were killed and swindled out of land.

I felt cynical as I looked up to the governmental structure and thought about events in another white building this week, where the first African American president met with a new President Elect, this a white man who has been endorsed by the Ku Klux Klan. Hillary’s loss has caused me pain this week, but not nearly so much pain as the election of Trump and all he stands for, and all his election says about our country, and the progress we lack.

With thoughts of the unjust loss of Al Gore to George Bush in my head, followed by the loss of Hillary to Trump, with a corrupt system of electoral college votes in place, I ascended the steps at the Capitol to join with like minds, the disenfranchised and their allies. I stood in solidarity in the cold with the gays and lesbians, transgender individuals, African and Hispanic and Asian and Middle Eastern Americans, atheists and Muslims, and women who fall into each of these categories. We stood together and we grieved and processed, talked and shared.

We stood on the steps of a government building all in white, above the tributes to white men, and we grieved our failure to find a place within their government. We stood and grieved that the laws of a country that was built on equality fails to protect its citizens who don’t belong, a country that said equality but from the beginning didn’t include women or blacks or anyone else in their plans.

I got a funny taste in my mouth as I looked over the city. My eyes landed on the Mormon temple and I thought of all those years I fought for a place to belong in an organization that celebrates white men, a church with the same history as the government that Trump was about to take over. I thought of all of the people I love who are in pain right now. And I realized that pain is nothing unique.

We have been fighting this fight since the very formation of America. This country that espouses its freedom and opportunity and American dream-ism with waving flags and fireworks. We espouse hope and acceptance, while half of us complain about their lack of religious freedom and their weariness over being politically correct. This is the country of leading gun violence and murders in the world, of the highest prison populations in the world, of one of the highest inequality rates for women in the world. This is the home of slavery, Native American genocide attempts, sterilization, stacks of unsolved murders against transgender women of color, gay change therapy, Japanese internment camps, lynching, Civil War, lack of representation in government by women, over-representation of African American men in prisons, lack of health care, extreme poverty, Communist witch hunts. This is the country that dropped two atomic bombs and launched a war on Iraq under false pretenses.

I feel practically pessimistic as these thoughts race through my head. I think of my heroes, people who have fought the system and had small triumphs along the way, some of whom were killed for their attempts. I think of Hillary Clinton, and Barbara Jordan, and Sally Ride, and Barack Obama, and Michelle Obama, and Martin Luther King, and Coretta Scott King, and Harvey Milk, and Fannie Lou Hamer, and Ruth Bader Ginsberg, and Thurgood Marshall, and Eleanor Roosevelt, and Margaret Sanger, and Harriet Tubman, and Abraham Lincoln, and Gloria Steinem, and the hundreds of others who spent lifetimes making small cracks in the glass.

After the small rally, and the hugs and handshakes, I walked back to my car in the cold, in the dark, and I sighed heavily. My grief remains palpable. I descended the hill from the Capitol Building, wondering what hope there is for a country that shines its white building on the hill and ignores those on its steps.