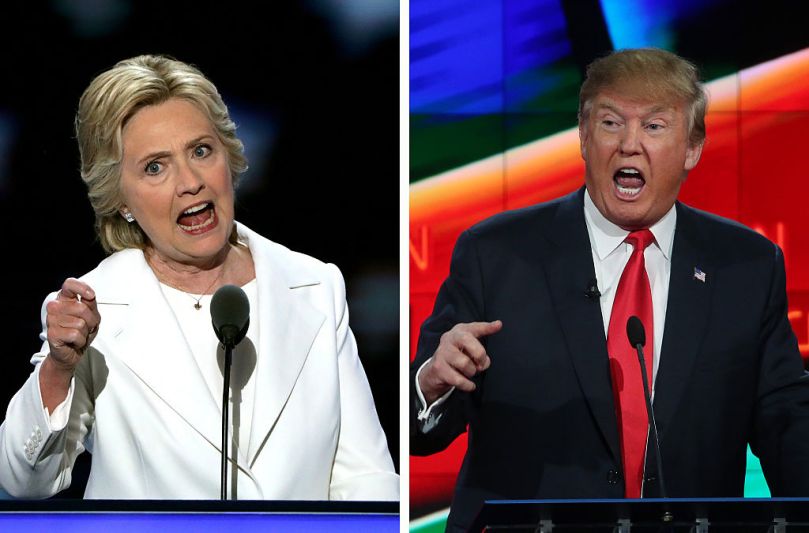 It’s 2016, and we are facing a historical election. It’s Hillary versus Trump, and in many more ways, it is Woman versus Man.

In my small world in Salt Lake City, Utah, I know very few people who will actually say out loud that they are voting for Donald Trump. Instead what they are saying is that they don’t know who they will vote for. They agree, in some sense, that Trump would be a very frightening president, but they like he ‘tells it like it is’. Hillary, they say, they just don’t trust because Benghazi and corporate funding and the Email scandal.

I took time to question a friend recently about this thought pattern. I was, admittedly, passionate and a bit angry in my words and phrasing.

“How could you even consider not voting for Hillary? I understand that you don’t ‘like’ her or consider her trustworthy. I get that, completely, given the many scandals that have surrounded her name.

“But on the other side of things, look at the sheer list of offenses on Trump’s part that are not mere allegations, but are direct quotes delivered to the public directly in speeches or over social media. He has called Mexicans rapists. He has said that he is the only man who can ‘save’ our country or make it ‘great’ again. He has encouraged violence toward those who disagree with him and offered to pay the legal fees of anyone arrested. He has threatened to ban an entire religion from the country’s borders. He has referred to the size of his genitals to the public. He has sent out unflattering photos of his opponent’s wives and implied that his wife is hotter. He has referenced that a female reporter was being unreasonable due to her menstrual cycle. After 50 men and women in a gay club were shot down, he Tweeted out that ‘he was right’ rather than expressing concern and love toward the victims and their families. He has shamed the parents of a fallen soldier. And, most shockingly, he has hinted that men who wield guns should take matters into their own hands in a veiled encouragement of political assassination.

“And those are just moments from the recent presidential run. Trump’s life prior to this was fraught with marital affairs, alleged abuse, failed business dealings, and alleged financial crimes. Hillary has been in politics for decades as a first lady, a governor’s wife, a senator, and a secretary of state, and she has run a presidential campaign prior to this. Before that, she was an attorney with a successful practice, with a long marriage. Trump has been a bizarre real estate mogul who is the very epitome of the rich white man, the one per cent that Bernie Sanders was so passionate about, who has plastered his face on board games, books, and T-shirts, and is most famous for hosting a reality TV show, and who has been married multiple times… to super-models.

“In the past, entire presidential campaigns have been decimated over singular offenses, like Mitt Romney being accused of flip-flopping. And when Bill Clinton had a marital affair and lied about it, the country sought to impeach him. Trump’s offenses are far more excessive in number and in pure extremism on every level, and you are telling me that he calls it like it is and that is why you like him? What does that say about you?”

Because this conversation was with a trusted friend, it ended okay, but she let me know that my feelings on the matter were very apparent, and very passionate.

And I’m completely okay with that. Because when I reflect on this topic a bit more deeply, I realize that this is very much about America’s feelings on women. Historically, our country has treated women abysmally. As property, as targets of rape and violence, as pretty objects that should be devoted to their men and children and belong in the home. The laws have changed, somewhat, but the attitudes have not. I could recite a long list of statistics to back this up, but it can all boil down to a few simple facts, that women are mistreated in business and health care and politics, that they represent a majority of the population and a minority of leadership positions, and that the United States has still never passed a equal rights for women law. In fact, while we require other countries to pass laws regarding protections for women in order to receive our aid, we refuse to pass the same protections for women in our own country. We even refuse to sign the mandates from the United Nations that have been put in place in nearly every country around the world. The law is called CEDAW, the Convention on the Elimination  of All Forms of Discrimination Against Women, and it has been in place since 1979, and has been signed by nearly every U.N.-affiliated country. The only U.N.-affiliated countries that have NOT signed the treaty? There are six: Palau, Somalia, Tonga, Sudan, Iran… and the United States. That means it has been signed by every other one, including China, Afghanistan, and even Iraq.

Many of the largest countries in the world have had female leaders by now, including England, India, Germany, Liberia, Central African Republic, Senegal, South Korea, Haiti, South Africa, Mozambique, Bangladesh, and Pakistan. The United States is not on this list either.

And if you still aren’t sure who you want to vote for, or if you are considering not voting at all, we can go extreme, and you have to ask yourself who you want with their finger on the button of the nuclear codes.

I understand if you don’t like or even trust Hillary Clinton, I get it, intellectually and emotionally. But if you can stack that up against every piece of the puzzle that makes up Donald Trump and still be not sure who you are voting for, I’m not sure I can call you anything but sexist. Take time to examine your biases and feelings about women in power, and your ability to excuse Trump and hold Hillary accountable.

And if you disagree with that, well, I suggest you do a bit more self-exploration. The fate of the country is at stake.