It is easy to understand America’s love affair with Maria Osmond. It’s her charm, her forthrightness, her vulnerability, her vocal versatility. It’s her ability to stay true to her roots and push herself forward into new realms. It’s her jokes, her gorgeous dresses, her authentic laugh, and her sheer enthusiasm and passion for what she does on the stage every night.

And let’s face it, she looks incredible. She credits particular nutrition products, but I credit her for her hard work, dedication to exercise, and incredible attention to detail. She was performing aerobic routines on that stage with much younger dancers, and keeping up with them, all while singing. She’s 56 and looks 40, and that is no small feat.

I sat near the stage in the Flamingo in Las Vegas, watching Donny and Marie strut and sweat across the stage, singing their hearts out. I enjoyed the performances much more than I thought I would.

Although I grew up in the 80s and 90s, I didn’t become an Osmond super-fan like my older sisters did. I wasn’t around to watch the young Osmond children singing and performing on television, hosting their own television shows and specials, starring in Broadway performances and musicals, touring around the world, writing books and magazines, and releasing album after album. I didn’t join the media craze as the Osmonds, particularly the most famous siblings (the youngest, Donny and Marie) married and divorced and had children. In more recent news, I peripherally followed their performances and victories on Dancing With the Stars, but never watched.

And now, as I sit back and watch them banter and cajole with each other on stage, taking turns singing classic songs off their old albums, new songs off their new albums, and some surprising hit selections (like “Walk This Way” and “These Boots are Made for Walkin'”), I get it. Donny and Marie have my respect. They are talented, and funny, and charismatic. And I recognize how difficult it is to keep a career alive for five decades.

Donny on stage is a bit juvenile and playful. In between songs, he goes through purses in the audience and takes credit cards and cell phones as a joke, returning them later. He promises CDs to everyone in the audience, then says just kidding. He pokes fun. He’s a bit ouf of shape, but he has some serious pipes and he sounds incredible singing. He’s a solid talent and it is easy to see the star power he has still.

But Marie… Marie is an empress. She’s a name brand. She’s a powerhouse performer who commands the stage with her dances and singing, everything from country to rock and roll and a shockingly beautiful foreign opera piece. A quick internet search of her name shows her connections to advertising campaigns, her own non-profit work for sick children, her dolls and crafting businesses, and her line of books. With three biological children and five adopted, she has been open with the public about struggles with depression and her struggles as a mother, particularly when one son committed suicide. And when Marie’s daughter came out as lesbian, Marie came out in support of her.

Donny and Marie closed the show with a long string of jokes, each ribbing the other. Marie pointed out that the only other famous brother-sister duo who built a career together were the Carpenters. They sang a medley of songs, hits they have done together over the years. And as Donny went through purses and wallets again, Marie rushed around the room drawing lips on the bald heads of male fans throughout the room, in in sequined high heels.

As I walked away from the theater with a smile on my face, I realized that Marie Osmond is a force to be reckoned with, an enduring and powerful performer and business woman who has firmly carved her name into the history of modern entertainment.

And she’s not even close to done yet. 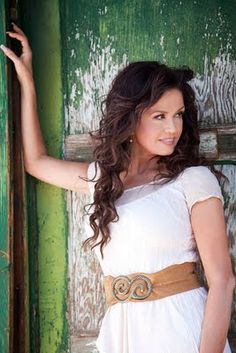