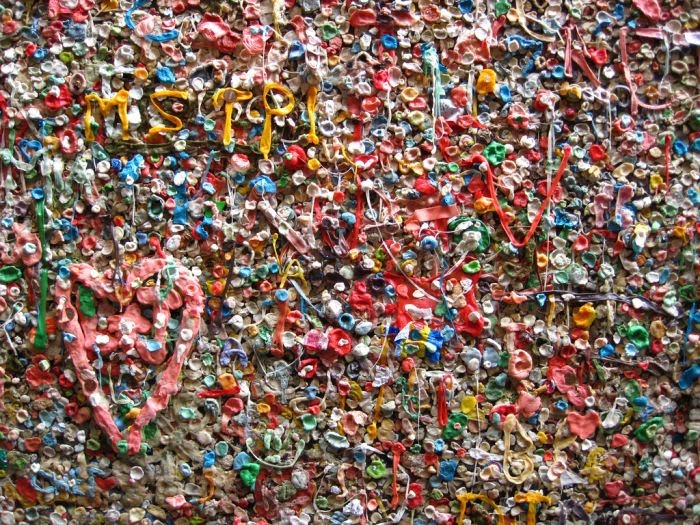 “I don’t know what to do, okay!”
The voice shrieked over the noise and bustle of Pike Place Market, a woman’s voice and it sounded like she was in distress. I navigated my way through the busy crowd and down a flight of stairs, past a couple of strollers. A woman dropped her freshly purchased flowers and the bag of water they were in broke, cascading all over the floor as she swore.
A man shouted back. “Well, that’s just perfect! That’s just fucking perfect! Isn’t that just perfect!”
I looked over a ledge and down into the section of the market the breaks into the alleyway with the famous gum wall, a wall of brick that is covered in chewed pieces of gum, varying colors floor to ceiling in a polka dot design that is both beautiful and makes you want to retch all at once. I still couldn’t see them, but I heard her yell back.
“I did my best, okay! What do you want me to do! What, you gonna hurt me now!” Her questions didn’t sound like questions, but like yells.
I couldn’t hear them as I worked my way around a group of people and down a flight of stairs. When I made my way into gum alley, I finally found them in a corner near the base of the stairwell. The girl was sitting down in a heap on the ground, knees up, the skirt she was wearing bunched up around her thighs, leaving little to the imagination if you were at just the right angle. She had a frayed sweater on top, light makeup (when she uncovered her face with her hands long enough for me to see), and her hair was in dreadlocks and a red bandana. A very muscular man stood over her with strong calves, red shorts and a tanktop, and a ball cap; his arms were massive. He was bending down, elbows on knees, and shouting at her, his face level with hers. He appeared to be establishing dominance somehow, making me even more worried about her.
“I told you to watch for it! I told you I wanted it! But you wouldn’t listen and you were a total bitch and now it’s too late!”
“I said I’m sorry!” She uncovered her face again and screamed up at him, and he stood and walked around, pacing angrily in front of her, clenching and unclenching his fists.
I looked around the crowd, the usual bustling group at Pike Market, and wondered why no one seemed to be stopping to notice what was happening here. There was no concern or regard for the situation, which was clearly escalating. A mother walked by with three kids on a leash, three young girls were staring at the wall of gum and making fascinated grossed-out faces at it, a man held his wife’s hand as she held her pregnant stomach, another couple spoke French as they looked at a map in their hands. Just around the corner, an older Willie Nelson type, frayed denim shirt and jeans and a long white beard and ponytail, played the guitar and strutted around, singing in an amateur voice while hoping people would toss money into his open guitar case. His voice carried over the alleyway though I couldn’t see him, a bunch of unintelligible melodies, and the only word I could make out was ‘bastard.’
The man yelled while strutting. “It was the perfect present! What else am I gonna get for her!”
And she screamed back, tears streaming down her face. “I already told you! I was looking at the other shelf for ideas when someone else grabbed it! Back off!”
Wait, they were fighting over someone buying something that he wanted her to buy? I looked confused. There were a hundred different shops with a thousand different shelves and ten thousand different items for purchase all around them, and this is what they were fighting over? I watched closely, ready to move on but just wanted to make sure she wasn’t in any danger.
The man pulled his cell phone out of his pocket to check something, and things were silent while he texted something and the girl sat there crying. Then he put his phone away, looked coldly at the girl, and said, a bit more softly, “I should have never shared my Ecstacy with you. What a waste.”
Then the man walked away, up the stairs, and out of sight.
The woman sat stunned for a minute, then leaned back against the wall, hands dropped onto the dirty ground, and she screamed at the top of her lungs, “Great, but what about me!”
This time people took notice. A couple of the college girls walked over to comfort her, make sure she was okay.
Me, I looked over at the gum and, with the events that just happened playing in my mind, said out loud, “What a sticky mess.”