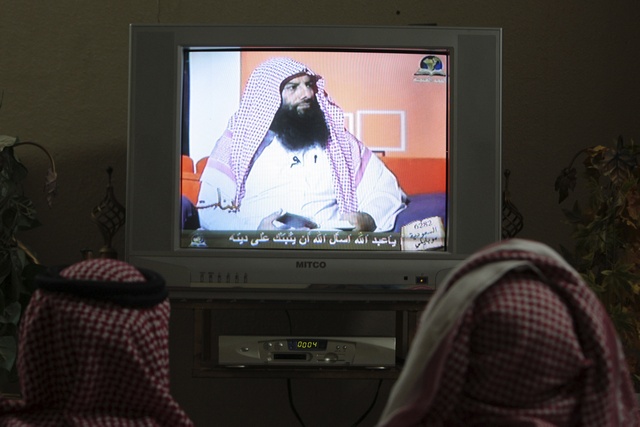 A man with a thick dark beard and a white and red checkered head covering talked briskly on the television screen, crisp clicks and beautiful trills a part of his Arabic language. Curly curved Arabic letters adorned the bottom of the screen, looking to my American eyes a bit like how a child would draw a fire or water, or a swift rippling cursive.

I watched the man speak for a few moments, listening to the lovely language with no context for what it might mean. The camera shifted to two other men, in similar garb and with similar beards, who laughed and continued speaking. Then the camera shifts to a long-distance view of a sports field, and numbers flashed across the screen, reporting scores and victories. I realized the television show was some sort of sports commentary, perhaps a Saudi Arabian version of ESPN.

My Saudi house guests looked over at me, noticing me in the kitchen. Both college students from Saudi Arabia, now living in the American midwest for several years, Ibraim and Nasser were in my home for the week as Airbnb guests, visiting the west coast on a road trip over their school holiday. Ibraim was 21, tall and lanky with thick black hair and a short mustache and glasses. Nasser was 23, heavyset with large hands and large features. Ibraim was quiet and thoughtful, Nasser more loud and boisterous with an infectious laugh.

“Is our television show offending you?” Nasser asked.

I smiled broadly. “No, of course not.”

“It’s just that it is in Arabic,” Ibraim looked up.

I turned back to putting away the groceries. “Well, that is very easy to tell.”

“And this does not offend you?”

“Of course it doesn’t. You can watch Arabic shows in my home and you can speak Arabic here, why would that bother me?”

Nasser rested his hands on his stomach and laughed. “Well, it is not your language. We would not want to make you uncomfortable.”

I shrugged. “I don’t understand it, but it doesn’t make me at all uncomfortable. Make yourselves at home, honestly.”

Ibraim relaxed back into the sofa. “Many Americans aren’t so tolerant.”

My mind shifted to recent media reports of Islamaphobia, and how often it was showing up on the news. I thought of all the recent mass gun killings by mentally ill Americans and how they seem to be shrugged off, yet how when one Muslim couple shot many others, the Muslim religion was blamed, automatically associated with terrorists and the Taliban and Isis. I thought of the support going toward Donald Trump, who threatened to ban all Muslims or to require them to wear identification on their clothing, like the Jews in World War II Germany with the Star of David.

And then I looked back to these two young men, bravely seeing America on their own, who were nervous to watch Arabic television in the home they were staying in. Both of them literally around the world from their homes, families, and communities, one of them studying to be a doctor and the other an engineer. When they had first checked in, they had asked detailed questions about the things there were to do in Salt Lake City. They asked about ski hills and cuisine, about the Mormon temple, about local parks and bars. When they ate at a local Middle Eastern restaurant, they had come in raving about the food. When they spent a day snowmobiling, they were both beaming when they returned, and Nasser declared the event “the best day of my life!”

I thought about asking them about their experiences in America, wondering how well they were treated, but decided it against it. Instead, I listened to the Arabic on the television, listened to the laughter of my house guests, and finished putting away the groceries.

“Did you have a busy day?” Ibraim asked.

“I did. I worked a lot. What about you guys, what did you do today?”

Nasser muted the television again. “Oh! We went down to the Mormon temple for a tour, as you recommended. It was very beautiful. Some of those female missionaries approached us and we politely declined their tour. I must admit, I know very little about Mormons.”

I took a seat. “Well, they probably know less about Muslims.”

Ibraim joined the conversation again. “I understand very religious communities like this one. A lot of religious cultural influence. Although I suppose it happens more pervasively in small towns than in big ones like this. That is how it is in Saudi Arabia. The religious culture there is everywhere, but in the larger cities there is more people and culture, more room for diversity. In the small towns, they remain very traditional.”

“That’s a very good way to put it. Salt Lake City has much more diversity. Many of the smaller local towns have a lot more religious influence on family and community.”

Ibraim and Nasser told me a bit about their families, and I told them a bit about mine, talking mostly of my sons. They mentioned their plans to wait to marry and have families until they were finished with college in a few years. We talked about their adapting to the small midwestern university they were attending, and how they had grown accustomed to it now, and they talked about both missing home and being glad to be away.

Soon, both of the young men went to bed, and I looked over to see the television still on, a beautiful Muslim woman in a head covering, speaking, and I thought about how little I know of Muslims, a religion that makes up one fifth of the world’s population, and how I really should take the time to learn more.

Nasser came back out to turn off the television, smiled, and bid me a simple good night.

I shook his hand. “It’s a pleasure to have you in my home, Nasser.”

He closed the bedroom door and I thought how these young men and I have far more in common than we have different.