At 6 am in a coffee shop, I overheard one of the best conversations ever, my fingers clacking nonchalantly on my keyboard to keep up.

Okay, picture it. Hillary Clinton. As the Bachelorette.

No, no, like the show. Like the Bachelor, except when a girl is one it. The Bachelorette.

Duh, I know. Come on, just hear me out. We all know she’s going to win the presidency. I mean, she’ll win the Democratic nomination, that’s what all the polls are saying. It’s gonna be close, but she’ll pull out on top and then everyone will vote for her over any of those Republican buffoons. And I mean, I don’t like Hillary. At all. But she’s gonna win and I’ll vote for her because she’s the least terrible choice.

I know, I know. I swear her whole campaign is like some whiny platform she built. ‘Look at me, I’ll Hillary Clinton, my husband was the president, so I should be the president, too. Oh yeah, I was Secretary of State, too, waaaaah.’ She drives me nuts.

Yeah, me too. But listen to this, listen to this. After she wins, we hold a Bachelorette competition to figure out who her vice president is going to be. All the current presidential candidates will try to get her vote. And every week, she gives a rose to some guy who will end up crying as his career comes to an end, and they drive him off in some hearse.

It’s brilliant! Hillary gives great facial expressions, she’ll be awesome. Each episode, she’ll go on some date. She can, like, hot air balloon with Ben Carson. They’ll be floating over the Earth and Carson could talk about how the Earth is really flat even though it looks round from the sky because that’s how God wants us to see the world.

What? That doesn’t make sense.

I know, that’s the point. Carson has some whacked out theories. So Hillary hands him the rose and two guys come and put him in a straitjacket and pull him off to the crazy house.

And then Chris Christie would take her to, like–oh! They could go bridge-jumping! In New Jersey! And he would be like non-stop talking about why he shut that bridge down that one time, and Hillary would give a classic look to the camera that’s almost an eye-roll. That guy is annoying as hell.

Okay, calm down, man. You’re way too excited about this.

It’s hilarious! Tell me you wouldn’t pay to see Donald Trump and Hillary on a date.

This show would be way funnier if it was Trump as the Bachelor. That guy is funny.

Yeah, but that would mean we would have to elect Trump president.

No thanks. I’d move to Belgium and laugh at the Americans.

So Trump and Hillary…

Okay, I’ll play. Trump would sit back over champagne and caviar and talk all about all of the beautiful women he’s been with. He’d be like, ‘I have dated some of the most beautiful women in the world and my daughter is the most gorgeous woman I have ever seen. They like me because I have money. But you can’t even keep your husband away from the interns. That’s why you should choose me, Hillary, because I would make you look good.’

Okay, yeah, this is a fun idea.

So then… I don’t know, like… horse-back riding on the Bush ranch with Jeb, and–oh! Salsa-dancing with Marco Rubio! That would be awesome!

What about Carly Fiorina? It could be a hot lady candidate date.

No one hates Hillary more than Bernie Sanders, though. They all pretend to respect and like each other, but you gotta know that they are just seething with hate. I mean, they both want to be president so effing bad and the other person is the one stopping them the most. So on their date, Bernie would be like ‘Hillary, congratulations on the nomination’ and he would look all happy but on the inside he is like ‘I hate you so much’ and she would be like ‘thank you, Bernie Sanders, you deserved it too’ but on the inside, she would be all ‘hahaha, I won, you crazy old man.’ You just know she and Obama were like that back in 2008.

But in the end, she would totally pick Sanders as VP.

That’s because the Republican candidates are all basically comic nook super villains. They are all ridiculous caricatures of humanity. She might as well be running up against Lex Luthor, Skeletor, the Joker, and, like, Dr. Doom. All ‘I’m going to rule the world!’ when really none of them have a chance. At all.

I can’t think of even one single Democrat candidate besides Bernie and Hillary though. Weird.

I–wait. Wasn’t there some guy named Chaffee? Oh, Martin O’Malley. What happened to that guy? He just disappeared.

Yeah, he can’t be on our show. No one knows who he is.

We’ve totally got to pitch this idea.

And it’d be tax deductible, right? I mean, it’s politics. 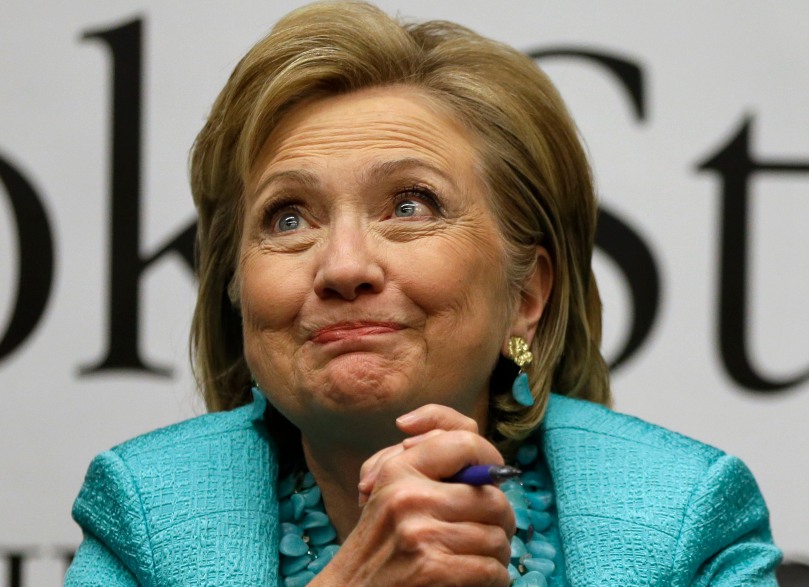